Now I don’t want to alarm you but I have some disturbing news. Maybe take a seat, pour yourself a stiff drink and take some deep breaths.

The picture above is of a cup of tea.

I know, I know, I can already hear you screaming: “What? How? What pollution is this before my eyes? What sadist is responsible for such a creation? How was this allowed to happen? WTF?”

Just keep breathing, it’s not going to get any easier I’m afraid.

Allow me to set the scene. We are travelling along the Wakhan Valley of Tajikistan, a beautiful and remote area of huge, towering mountains and glistening lakes, and the previous night, after some arduous trekking, we had eaten a strange meal of frankfurters, spaghetti, garlic and onions.

Now it is the morning and in the same hotel we are served rice pudding for breakfast (which makes for a surprisingly good start to the day) alongside the regular green tea. Tea here comes green or black, but never with milk. The green tea is fabulous and we have been known to drink pots of it, one after the other, like it’s Stella or something.

But then suddenly out of nowhere, our driver Deesh was poured a cup of what looked like English breakfast tea with milk. I stared in fascination, instantly craving the Saturday Guardian, and a bacon butty to go with it.

But then he did something I will never forgive him for. Never.

He added spoonfuls of yak butter. And salt.

He put yak butter and salt in his tea. And then he stirred it.

And then he drank it. 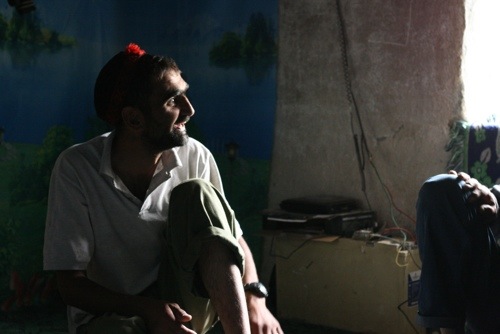 This is the said madman.

Somewhat unconsciously, I let out a small cry of horror and started shaking my head furiously. I think I murmured: “No, no, no, no, no,” repetitively as I searched his face for some explanation, some reason, for his absurd behaviour.

But instead of any justification, I just heard laughter from the local women around me, who were also stirring their buttery tea.

And just when I was at my most vulnerable, trying to take it all in, I was unknowingly poured a cup of the filth myself. Butter and salt were added before I had time to say: “Milk, no sugar please,” and the bread was pushed my way.

I looked to Deesh, in disgust, for some guidance. He ripped off some bread and dunked it in his tea – all nonchalant as if it was a bloody Rich Tea or something.

I bravely tore a piece off myself, muttering oaths to Yorkshire Tea under my breath, and dunked. 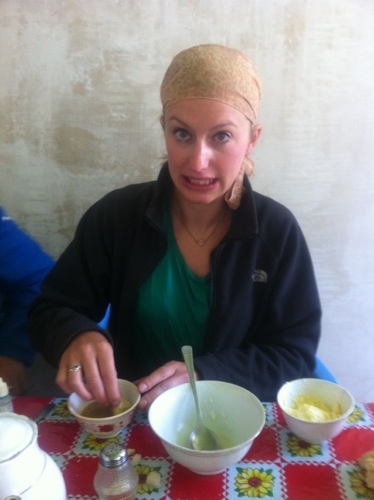 I brought the sloppy bread to my mouth and bit down. 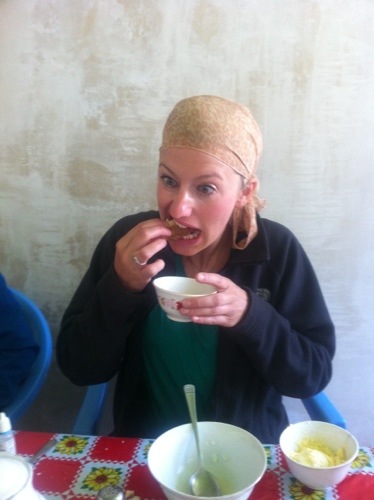 The warm, wet bread dissolved too easily in my mouth, overloading my tastebuds with a greasy tea flavour that tasted neither of tea nor butter. 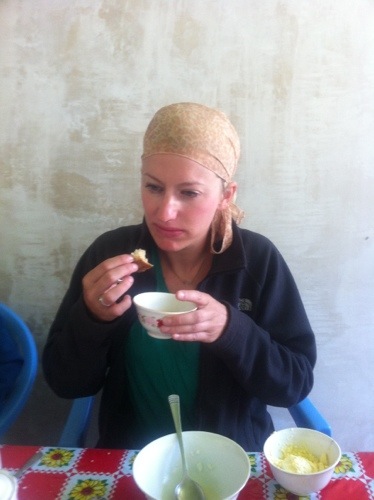 Note: This is not the tastebud equivalent of drinking a cup of tea with a slice of buttered toast. 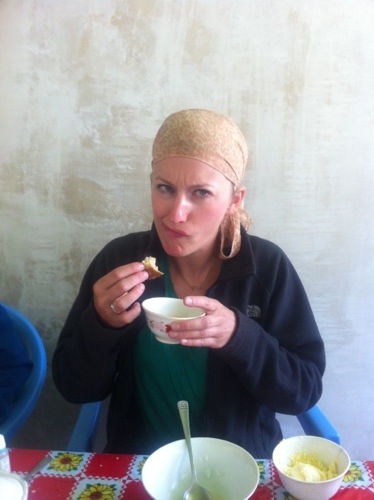 It tastes more like bread that has been slobbered on by a dog before being drizzled in dripping. 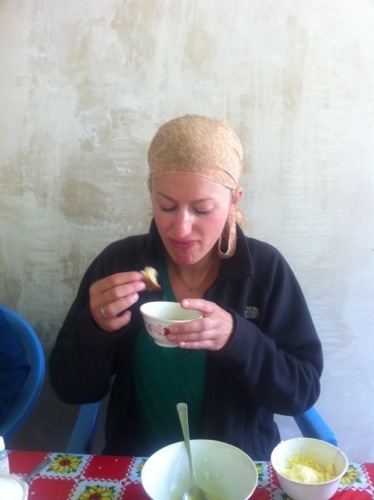 But I knew, to really know what this “local delicacy” was all about, I would have to drink it in its pure, defiled form straight from the porcelain cup. 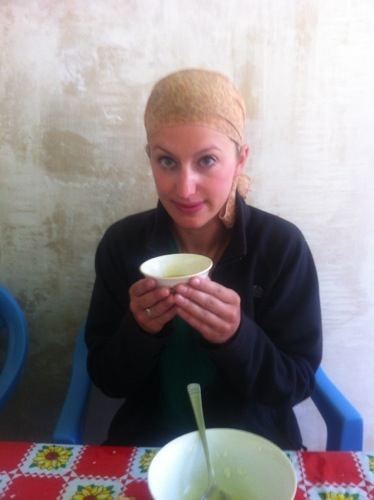 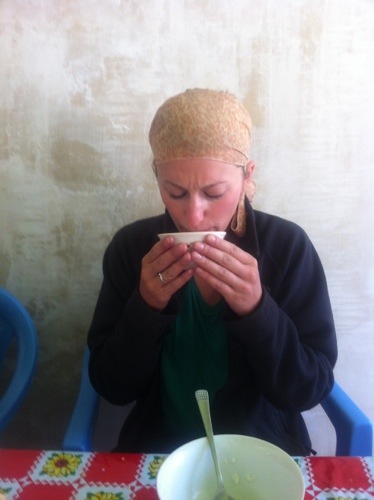 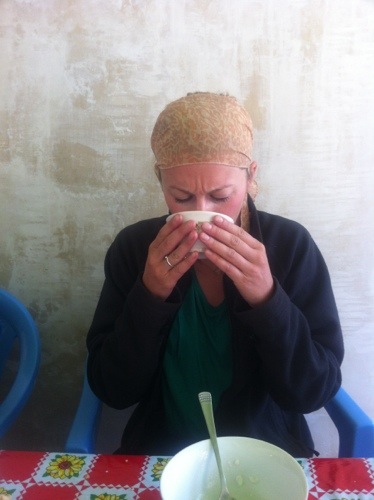 And quite frankly, it was alarming. 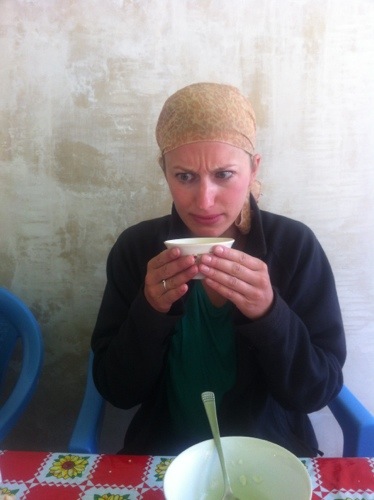 It was downright dirty. 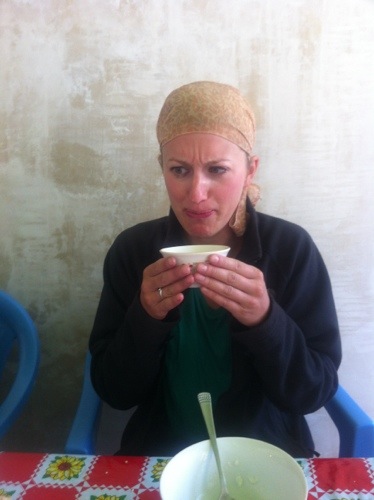 It horrified me to my core. 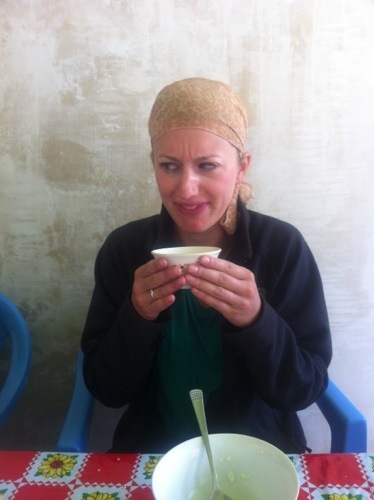 The subtle flavours of tea were washed out by a greasy, buttery sensation that stuck to my teeth and the roof of my mouth like glue. 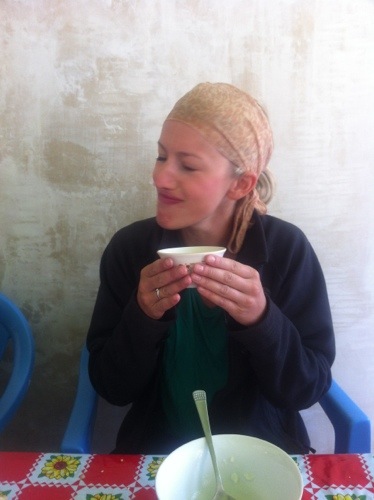 So I should have just brushed my teeth and left it at that. But I wanted to ruin your day too.

(PS Picture credits go to the Mongoose who took great pleasure in documenting the ghastly affair).

6 thoughts on “How to Ruin a Good Cuppa Tea”