I know it sounds a bit naff but sometimes I can’t help but think that things really do happen for a reason. Like the last time I was travelling and I didn’t get the job on a newspaper back home, causing me to spend another six months in Australia and meet Matty, or the time that mum wouldn’t let me sit in the front seat once and two minutes later we crashed into a van carrying ladders, which went straight through the windscreen on the passenger side. Or the time at Baku train station when I decided to buy four beers for our overnight journey to Seki, a mountainous village in northwest Azerbaijan.

As I’ve mentioned in every post for the last two months, there are three of us on this trip – me, Matty and the Mongoose. Three beers would have been the normal choice, but as I pulled them out of the fridge, my hand instinctively went back for a fourth. Matty and the Mongoose eyed the fourth beer suspiciously upon my return.

We climbed aboard the beautifully retro train, introduced ourselves to the two others in our little room and then took our beers to that strange no-man’s land of trains, between carriages, that rattles and shakes precariously across the tracks for a night-cap.

It was there we met Elchin. A country lad who now works in the capital Baku, he was returning home to visit his family for the weekend. His English was brilliant and we started chatting about cultural differences between our countries. This might not sound of much significance but few people we’d met spoke good English and we were bursting at the seams with questions, or at least I was. We dashed off to get that fourth beer for Elchin. 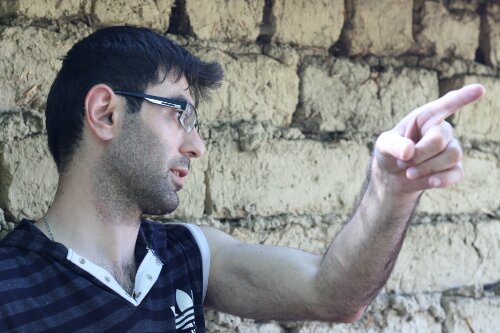 As we all clinked bottles, Elchin said: “You must come and visit my family tomorrow, I’ll show you around.” By the end of the bottle we had a plan, we were to spend the next day in Seki as planned, but the following day we would travel to Elchin’s home town of Zaqatala, to spend the day with his family.

Two days later we saw his smiling face again, as he met us off the bus in his home town and loaded our bags into his brother’s car. As we wandered the local market he was continually greeted by old friends and acquaintances. He had not been home for three months, he explained. 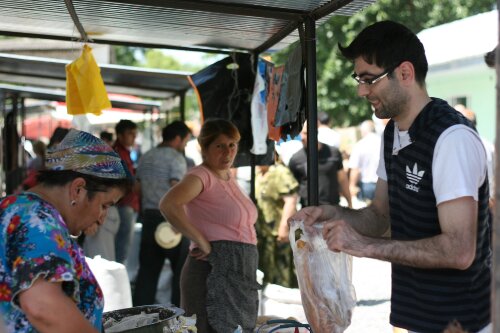 Here he is buying what I can only describe as deep fried bread, which incidentally is bloody good. 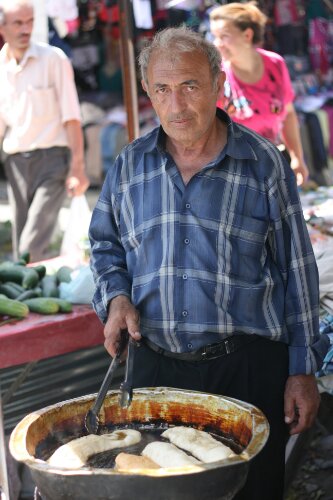 This is the man responsible for said deep fried bread. Good man.

Then we turned a corner and found ourselves in the live meat section. A couple of chickens had a cross word… 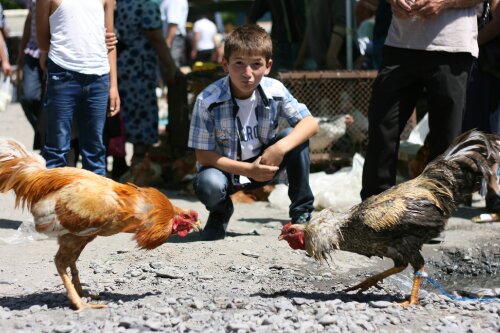 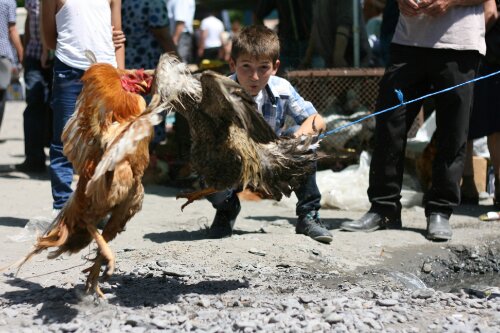 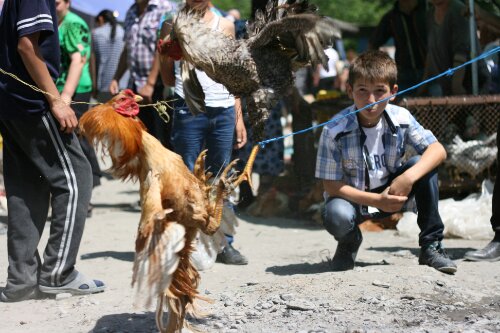 We left the fighting cocks behind (fret not, it was not a real cock fight just a couple of chickens squaring up to each other) to explore the little known city of Zaqatala, which must be pronounced in a mythical spellbinding manner, like a magician crying ‘abracadabra’. 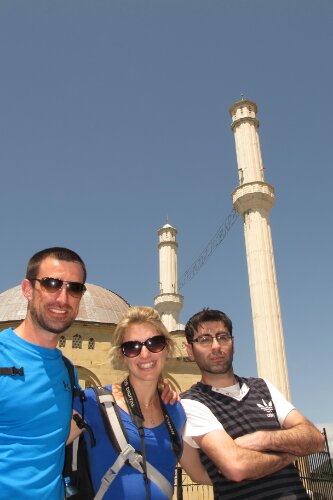 And enjoyed a pot of cey (tea) in a lovely park at the top of the city. 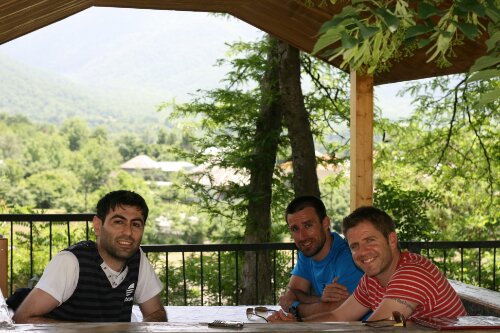 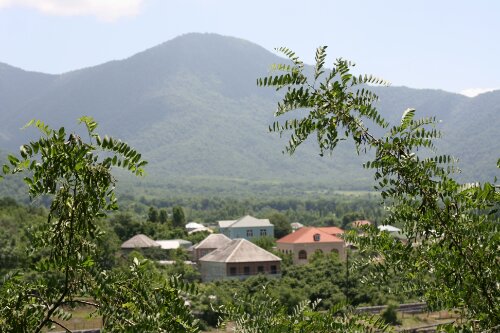 Then it was time to return to his house for a spot of lunch. As we pulled into his lovely farmyard home, we were greeted by grazing cows, clucking chickens and his beaming mother who warmly embraced us as we each stepped out of the car. His father, brother, sister in law and their two little children all greeted us with friendly Salam’s and we were soon settled down in a shady spot under a large hazelnut tree for a bite to eat. 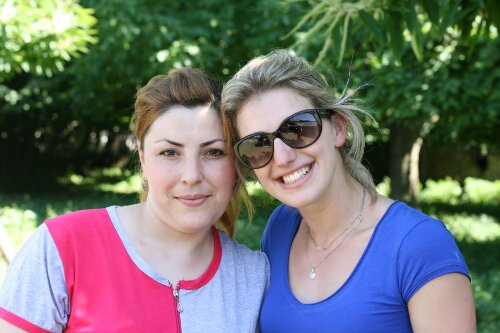 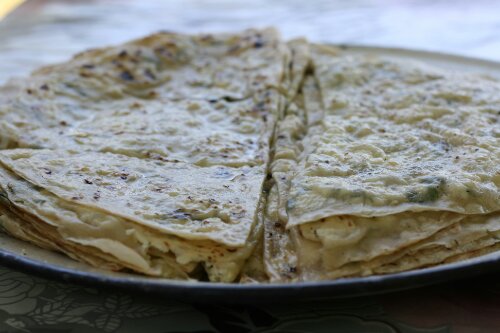 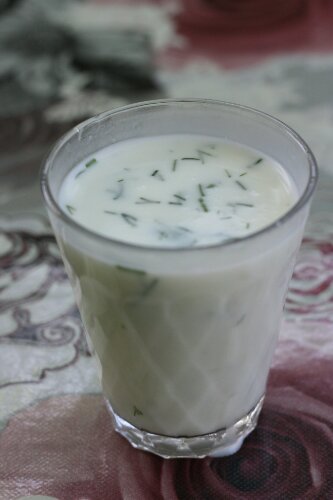 And then just when we thought the day could not improve, Elchin announced he needed to tend to the cows, and somewhat amused by my enthusiasm to help, agreed that yes I could help water them. 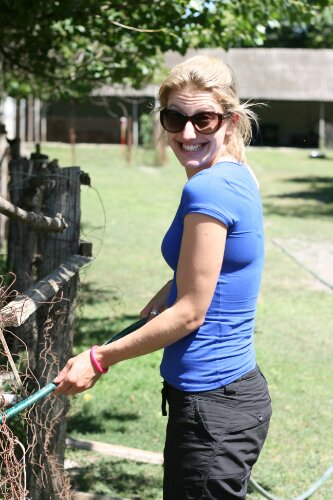 My hose holding skills were second to none.

Finally, somewhat overwhelmed by the fabulous hospitality, kindness, good food, and farmyard labour (what do you mean, I was only holding a hose?), we returned to our shady spot for a snooze. As the cows nudged us awake we realised, with some regret, it was time to get the sleeper train back to Baku. The four of us piled into the car and stopped for a quick beer at a shady little cafe by the river that runs alongside the railway line.

“Four beers please,” Elchin ordered in Azeri. And as we raised our glasses for a second time in 48 hours we toasted to kindness, hospitality and new friends. Because really, there is no finer way to see a country. 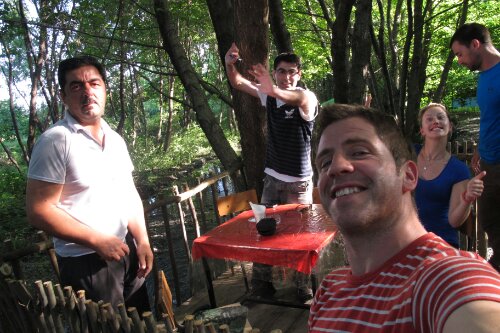 3 thoughts on “An ode to fabulous hospitality in Azerbaijan”