I must start this post with a big apology for the long silence and lack of blogging. I’m going to blame being stuck on a boat for three days, spending a week in deepest darkest Turkmenistan and then camping by a shrinking sea. But I am now back (with plenty of material)! I say ‘back’ in the loosest sense of the word… We have entered a world where the food is meat and the wifi is slow. So slow it is almost impossible to blog at times. Nevertheless, I am determined to continue telling the world in words, so please bear with me if there are big gaps.

In the meantime, I have lots to tell you about. And I intend to start on a morbid subject. Sorry about that.

Rarely a day goes by when I don’t think about death. I don’t mean that I spend hours morbidly planning my own funeral or fretting how I will spend my last days, although, everyone indulges in that a little, don’t they?

I just mean that more often than not I’ll get a fleeting morbid thought. I blame the years of sitting in inquests as a reporter… the man who died after a candle melted down the back of his TV has left me suspicious of romantic lighting, the countless cyclists who sadly never made it home left me seeing even the smallest of vehicles as the biggest of threats when I cycled to work every day, and then there was the spot, outside a nightclub near my work that I passed too often, where a man died from a single punch.

But the other day, when visiting an Armenian graveyard, I was presented with an entirely new line of thinking on the subject. Let me put it to you.

If your gravestone had to tell the story of your life, or death, through pictures, what would it look like? Traditionally in Armenia when a loved one dies, the friends and family will gather together to think about how their story should be engraved on the gravestone – some choose to tell the story of their life, while others opt for death.

Visiting the Noratus graveyard in east Armenia, we were presented with a whole range of stories. From dramatic massacres to the mundane routines of life, the tales of the dead come alive on the gravestones. Two personal favourites, of such extremes, are the ‘wedding banquet’ stone and the farmer’s stone. 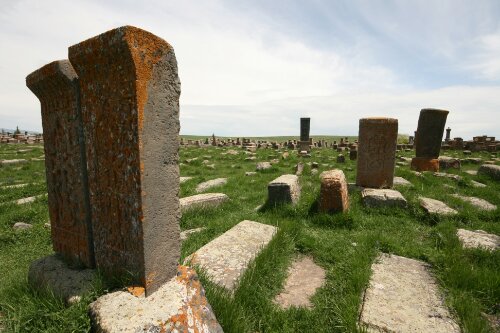 The wedding banquet shows just that – a large, rectangular table, crowded with smiling people, clinking glasses and cheering the happy couple in the middle. But to the left of the party, coming through an open door, is a man brandishing a weapon. The gravestone shows the scene seconds before he slaughtered the newlyweds and all their guests at the table, our guide explained. The couple are buried underneath. 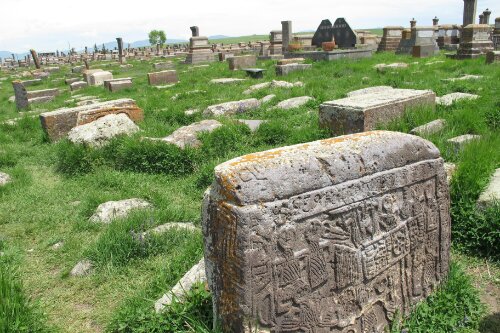 Not such a happy scene after all. We were swiftly moved onto the farmer’s stone, that read more like a comic strip sequence of pictures. The first engraving showed the farmer leaving his house in the morning, the second showed him hard at work in the field and the third showed him coming home to a big Armenian barbecue cooked by his wife. Because that was his life. Day in, day out. 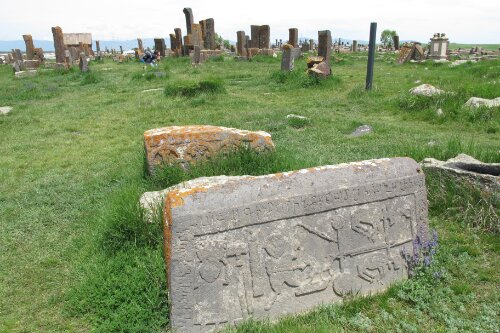 I looked at the big plate of food being carried by his wife and concluded his story was definitely a happier affair than that of the poor newlyweds. And as I walked across the field of story-telling stones, I couldn’t help but wonder what my tale would be. It had to be about life surely, not death, because it is life that should be celebrated. 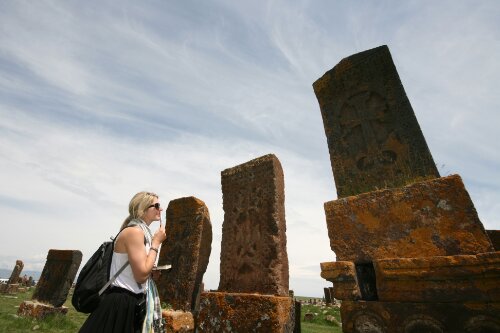 I looked at the old women, knitting scarves and mittens to sell to tourists in the scorching 30 degrees sun, and wondered what their story was. What had they lost, what had they gained, what few pictures would sum it all up? 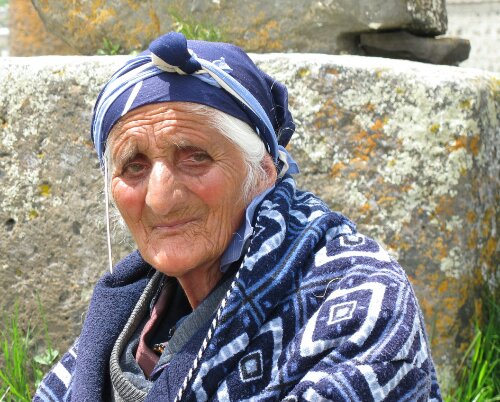 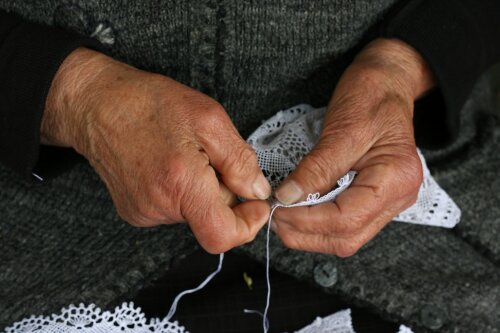 I turned to Matty as we gazed at the stone of the drunk fisherman who got bitten by a snake while he slept, and asked him what our story would be. He looked thoughtful for a minute.

And I decided that yes, the good times, the smiles, the laughter and travel would make for a very pretty picture in the graveyard. And suddenly it all felt a little less morbid.