My decision to travel the Silk Road was made while rambling around the Lake District with Matty and the Mongoose – hunting out film locations from the legendary British film Withnail and I. Truth be told, I didn’t really know what I was signing up to.

Matty and The Mongoose are walking ahead on a dusty narrow path, surrounded by trees. Delia is dawdling and looking at flowers and thinking about how to get into Uncle Monty’s Cottage. The boys have a conspiratorial air about them.

The Mongoose: So mate, it’s been four years since we pledged to travel the Silk Road together – when can we make it happen?
Matty: Well Delia has suggested that her and I travel South America in 2013.

The boys lean their heads together and talk in low tones. Matty then hangs back and waits for Delia while the Mongoose continues ahead

Matty: What say the three of us travel the Silk Road together in 2013 and then we do South America on the way home?
Delia: Ok.

Some squawking, high giving and general elation. Followed by a long pause.

Delia: Where exactly is the Silk Road again?

The following months involved me learning about this ‘stan, that ‘stan, another ‘stan and ‘stan, ‘stan. I soon had a huge list of places I wanted to see… The shrinking sea in Uzbekistan, the gold statue of the Turkmenistan president that rotates at the exact same speed as the earth so the sun is always on his face in daylight hours, the beautiful pony treks of Kyrgyzstan and the countless yurt stays in Tajikistan.

But still, when we set off almost three weeks ago, I wasn’t 100% sure what to expect.

Europe was a wonderful whirlwind and then suddenly we were in Turkey. And I fell in love with Turkey. A far cry from the tacky beach resorts of the south coast, we visited the fairy tale land of Cappadocia before taking a stunning train ride through the mountainous north-east of the country to Kars.

But it was a little place called Ani, an old ruined Silk Road city, that made me stop in my tracks, stand still and realise what this journey is about.

Once the stately Armenian capital that was home to more than 100,000 people, today Ani’s crumbling city walls and ancient churches are surrounded by nothing more than velvet green hills and a gurgling river. 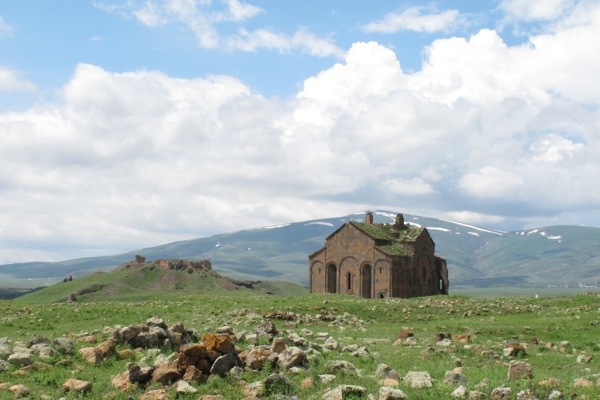 With only seven other tourists also exploring the ruins, which are spread over acres of land, it felt like we had discovered it quite by accident. It was both eerie and beautiful. 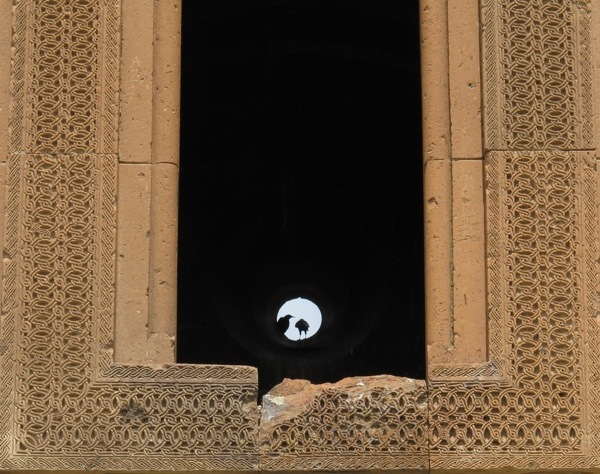 We had more birds than people for company. 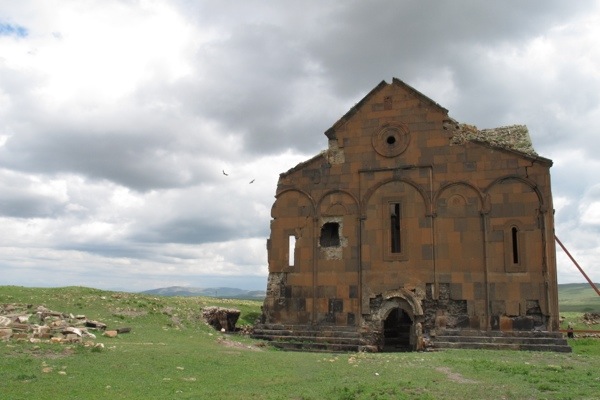 The dramatic landscape rolls right into Armenia, a border which remains closed to this day. 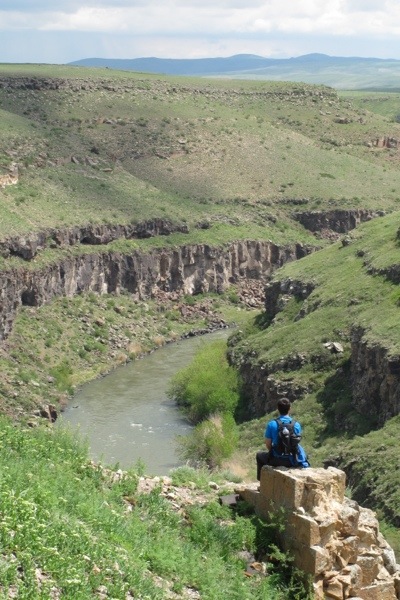 The Mongoose gazes out to Armenia.

As we climbed up an old mosque tower (a dark, enclosed steep concrete staircase with a local who liked to brush up against me), and looked out on the view below it was suddenly so easy to see it as the hustling and bustling Silk Road city it had once been. 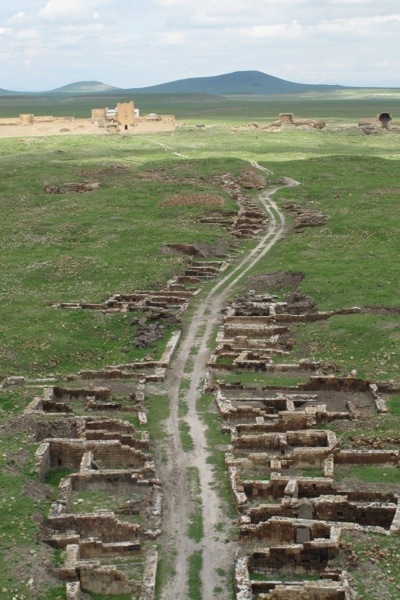 This excavation shows a whole street of what would have been shops, trading their goods and perhaps selling the silk that had just completed its long journey from China. 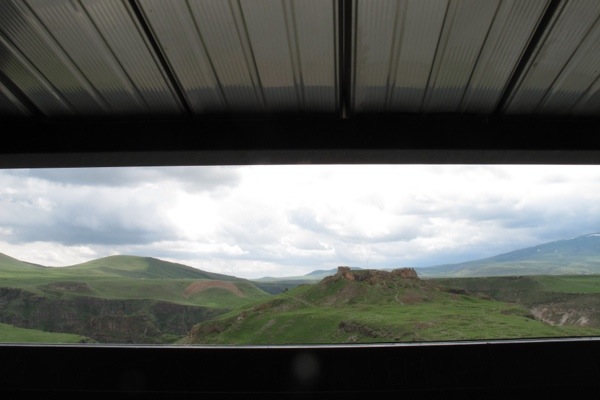 The view out to Armenia from the tower.

It was the sort of place that took you back in time, and made you imagine another world, another place. It brought history to life. 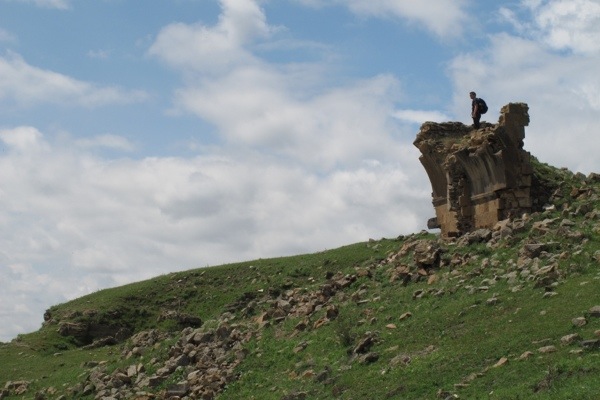 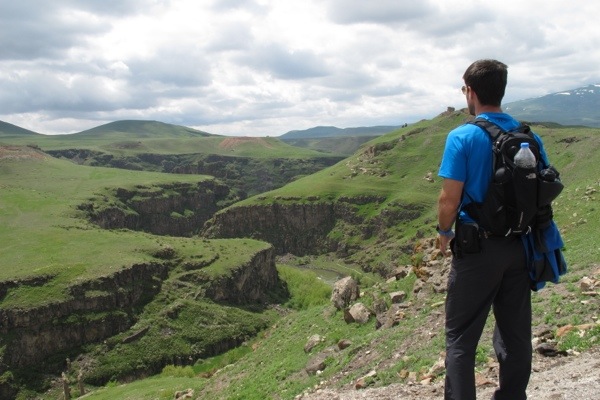 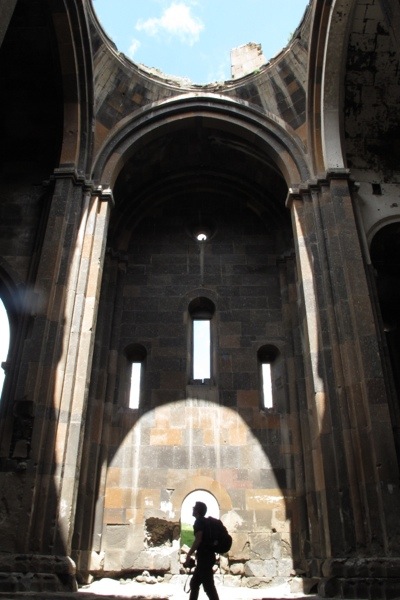 It made me think about back to that windy day in Penrith as we trudged to Uncle Monty’s ruinous cottage, and how glad I was for giving that one word answer. Because Ani is just the beginning of learning about a rather special time in history… and for me, that is what this journey is about. 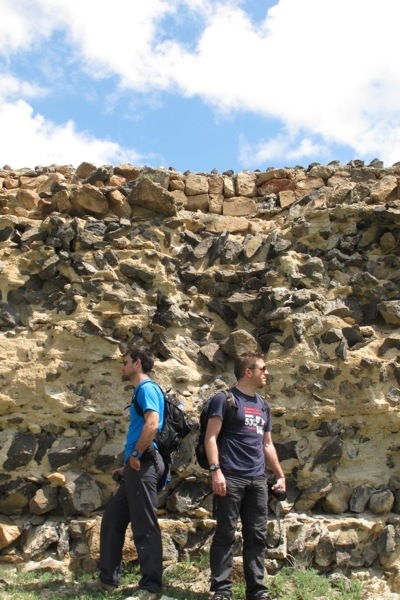 We travelled from Goreme, Cappadocia to Kars to visit Ani.

We caught the airport shuttle bus to the nearest train station called Kayseri (our lovely Hostel – Shoestring- organised this for us and spoke to the driver to make sure he also stopped at the station on the way to the airport) and then caught a 16 hour sleeper train to Kars, which was – without a doubt the best and most beautiful train journey of the trip yet.

You cannot make train reservations in Turkey for sleeper cars etc online or by phone – you have to just turn up an hour early and do it there. We were assured the trains are never full as the Turkish find them too slow compared to buses. Sure enough we turned up (about three hours early as shuttle bus did not go any later) and got tickets at the station no prob at all.

In Kars we stayed at Otel Mirac, which was a basic but nice enough guesthouse (although the rooms STANK of smoke) and the guy at the hotel told us it would cost 40 Lira (£15) to go out on the minibus to Ani the next day, which seemed to be the only minibus making the trip as we had the place to ourselves. It was worth every penny.