The great thing about a sandwich is the beauty that lies within. Between those two, thick fluffy yet crusty slices of bread, could lie anything. Absolutely anything. If you want to munch on crushed anchovies and marmite smeared inside a crusty granary roll you can. And nobody will probably even know. The sandwich holds all secrets.

In Vietnam the sandwich has continued to do an excellent job in surprising, impressing and to be quite frank, amazing me. Strictly speaking of course, it is not a ‘sandwich’, it’s a baguette. Now I don’t want to get all ‘colonial’ on you – I am more than aware of the destruction, death and damage caused by the French colonial years in Vietnam – but man, they left the baguette. And that must surely be seen as a silver lining of sorts.

It goes by the name of Bánh Mì here – and no, it doesn’t sound like it is written. Vietnamese is a tonal language – the words are sung as if they are musical notes on the bars of a great composition. I on the other hand can’t sing or even talk in high notes, which leaves me with little more than a blank face or two when I start singing for my Bánh Mì.

But trust me, these little baguettes are worth persisting for. They are normally sold in a fairly innocuous-looking cart of sorts, which will often reveal a woman in her mid 50s furiously cutting sideways into the crusty baguettes with a seemingly blunt knife. Welcome to the Bánh Mì cart. 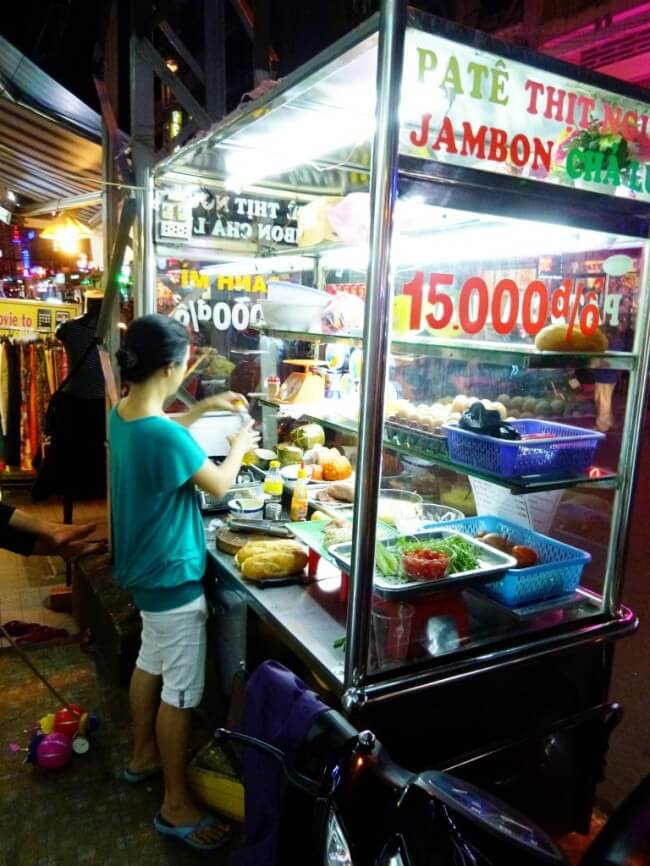 You will see pots of unidentifiable ingredients – odd shapes and colours of what I have since discovered is ham, alongside sliced chillis, eggs, vats of meat juice and tomatoes. The woman will look at you increasingly mystified as you try to sing for your Bánh Mì. She sells nothing else so eventually will raise an eyebrow and sing “Banh Mi” back to you, which of course you think sounds exactly the same as what you were saying.

But she is the Bánh Mì boss so you smile sweetly and nod enthusiastically as she begins her work. First the bread is stabbed length-wise down the baguette before a vat of, what I still think is, Mayonnaise is smeared across the soft, fleshy inside. Next comes a generous slab of pate that coats the mayonnaise nicely.

Upon the thick bed of pate and mayonnaise the ‘ham’ is then placed, which can be white, pink, or something in between. And then it starts to become a bit of a blur as things are just thrown in, as if flying out of the little metal tubs that line the cart’s shelves. Chilli, coriander, fish sauce, green things, red things, pickled carrots. You know the creation is nearly complete when your smiling Bánh Mì master turns to the sizzling sunny side-up fried egg behind her and lifts it straight from the pan into your heaving baguette.

It is wrapped up in paper or cling film, held together by an elastic band and costs you the equivalent of 50p.

Sometimes you can just eat your Bánh Mì then and there – just stand in the same spot as the cart and tuck right into the gooey, crusty goodness. But sometimes you need to take it carry it home, sinking under the weight of its own filling, and lie it on a plate and prepare yourself for what comes next.

By this point the piping hot egg has seeped through the pate, soy sauce, mayonnaise and meat – turning it into an almost pie-like sandwich. The crust retains its crunch, but the inside turns into a delectable warm mush of eggy, meaty, herby goodness with an incredible chilli after-bite. 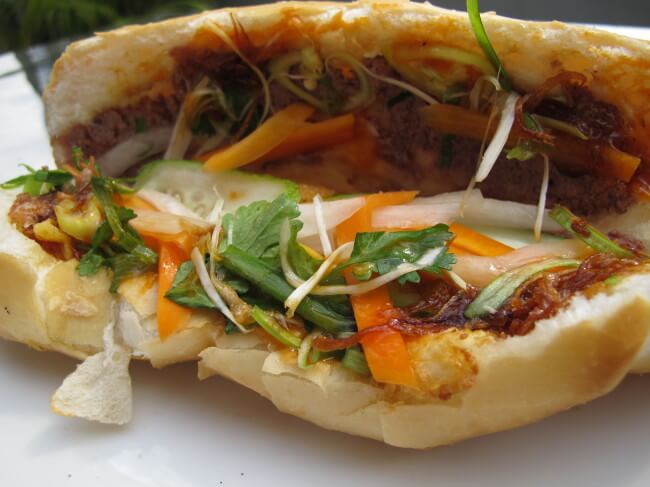 Serving Suggestion: Best enjoyed with an ice-cold bottle of Bia Saigon, available from all good retailers for about 30p.

It is Vietnam in a sandwich. It’s everything that a sandwich should be. And it knows it – it seems to almost proudly brag about the weight and sheer weirdness of its fillings as it is placed in your hands. It is after all, a sandwich that will quite literally have you singing for your supper.

10 thoughts on “Bánh Mì in Vietnam: Sandwich of the Gods”