“You’re going on holiday?” asked one of my friends, slightly incredulously. “Your entire life is a holiday”.

She had a point. The last year has been something of a wonderfully, long vacation. But we were travelling (aka throwing ourselves up mountains and taking cold showers at high altitude), then teaching English, setting up a business and finally, taking North American students on tours of Europe.

So to reward ourselves we decided it was time for a holiday. And so off we set with a Kindle full of books and a bag full of swimwear; vowing to do little but eat, sleep and sunbathe. We were on our jollies!

Our first stop was Split (before heading to the islands) and we instantly fell in love. With flights costing from £100 return, I thought it would be rude not to try and convince you to get involved with this gorgeous port city. So, once you’ve booked your flights, here’s my top 10 things to do in Split to get you started:

1) Gorge yourself on seafood. I’ll be honest, we found Croatian cuisine to be a mixed bag. Sometimes glorious, sometimes a tad bland – think, gnocchi with watery meat juices. However, the seafood on offer in Split and the nearby islands is absolutely wonderful. Many restaurants will offer a seafood platter for two and we ended up having some of the best fish of our lives at Konoba Marjan (Senjska 1, Split). For about £30 we were served sea bass, sea bream, squid, tuna steak, hake and large prawns served with marinaded roasted vegetables and homemade crusty bread. The white fish was superbly tender and melted in our mouth, while the tuna was perfectly seared and meaty. The waiter recommended the Bibich Riserva 5, a Croatian white wine that I was initially a little sceptic of as it blends five grapes – but it worked very well with the dish.

2) Find some locals singing under the naturally acoustic arches of the town. We were fortunate in that there was a big festival approaching in Split – whether that was why we chanced upon the teenage singers I don’t know – but it was quite a remarkable experience. Surrounded by Ozujsko beer bottles they were singing some traditional songs under some arches within the palace walls – and their voices carried powerfully – warbling and reverberating across the square.

3) Find a bargain lunch. I first visited Croatia 10 years ago and upon returning this time I was staggered by how much more expensive everything is. It’s hard to find a meal for less that about £7 these days (and that’s before you add the booze). But we found some great bargains. Firstly, head to one of the Billa supermarkets and buy the crustiest bread, local cheese, hams, salad and cold beers and enjoy an impromptu picnic on the waterfront. The ham here is like Iberico ham – delicious – and this is a much cheaper option than most restaurants. However, we also found a fabulous little restaurant near the waterfront called Dujkin Dvor on Obala A. Trumbica (also known as Pasta2Go), that had a really wonderful range of affordable dishes. We opted for the meatballs of the day (huge homemade meat balls in a delicious sauce and creamy mash) which cost just £4 and a lovely Mexican tuna salad that cost £2.70. Bargain! And tasty.

4) Take a Walking Tour. We had been in Split for a couple of days before we took the One Penny Walking Tour – and wow, I felt like I had been walking around with my eyes closed for two days! The tour costs 1 Euro per person and we were given a wonderful guide who expertly walked us around the Diocletian’s Palace for 90 minutes. The old town is set within the palace walls, which dates from 305BC and our lovely guide took us right back hundreds of years ago as she showed us where the ‘vomiting’ rooms would have been so that people could gorge themselves on 21-course meals without having to skip any courses. Man, I was born in the wrong century.

Split… where the pavements are made from foot-polished limestone

5) Get amongst the Croatian Wine. Croatia has a wine history that dates back to the Ancient Greek settlers and most of it is made on the islands off Split. We quickly deduced that only philistines would dare neglect wine on a trip like this. Our first supermarket bottle left us somewhat disappointed but then we decided to sign up to a walking tour (see point four) that finished with some wine tasting. Perfect. We ended up at the Diocletian’s Palace Hostel and Wine House, which did not disappoint. Set in one of the narrow cobbled alleyways of the old town, surrounded by stone buildings the atmospheric wine bar has cute wooden tables and makes for a pretty picture-perfect wine tasting setting. We liked the Cesarica white wine (made on Havr island) so much that we ordered a bottle of it (for about £12) alongside a platter of ham and cheese. We also heard great things about the Art of Wine, a shop which does tastings and trips out to the nearby wineries but with three taster glasses of wine and a nibble platter starting at 35 Euros a head we thought it was a little steep. The Diocletian’s Palace Hostel and Wine House is located at Ulica Julija Nepota 4.

6) If all the wine, cheese and fish consumption gets too much head to one of the fabulous galleries in town. We visited the Mestrovic Gallery, which was fabulous. Home to a huge selection of sculptures by Ivan Mestrovic (who is the artist behind the large-wizard like statue by the golden gates of the palace – which incidentally has a golden toe. The gallery is set in the most beautiful house overlooking the sea and nearby islands. He built the house himself as a home, gallery space and workshop before fleeing the country due to his anti-communism tendencies. The view and the building itself is just as impressive as the sculptures. We had a marvellous hour or so here.

The fabulous work of Ivan Mestrovic

7) Stay in a funky apartment with a balcony overlooking the old town. We have used the apartment rental website of Airbnb throughout our trip in Croatia and have not been disappointed. We have not spent more than £17 – 30 on accommodation per night and have had lovely little apartments with balconies and light, airy rooms. We loved this little place in Split.

A small but perfectly formed balcony on our apartment on Split

8) Climb up the steps of Marjan (west of the town) to be rewarded with the most fabulous views of the Split. And if you’re parched, fret not, there’s a bar at the top. Even better, hire a bike and cycle the peninsular around this area. It is gorgeous. We cycled up to a different viewpoint, enjoyed a fish soup near a gorgeous, rocky cove and just took in the gorgeous forested landscape around us. Bliss. There are a few places in Split hiring bikes, we hired ours from a place near the port – they tend to cost around 2 Euros per hour and we were impressed by the quality of the mountain bikes. 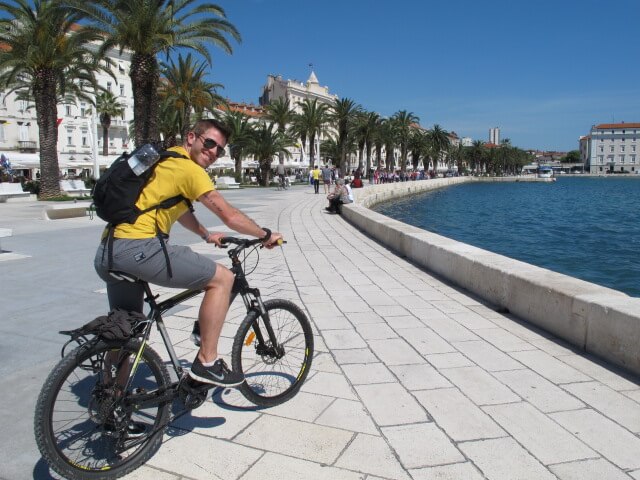 Matty working up a sweat…

9) Visit the nearby islands. You cannot come this far and miss them. Vis, Hvar and Brac are the islands off Split, which are anything from an hour to 2.5 hours away by catamaran. We visited Hvar, which has the most beautiful town and apparently a happening night life in the peak season (be sure to have sundowners at the Hula Hula Beach Club on the ocean) and Brac which has the beautiful Zlatni Rat Beach near Bol.

The lovely island of Hvar 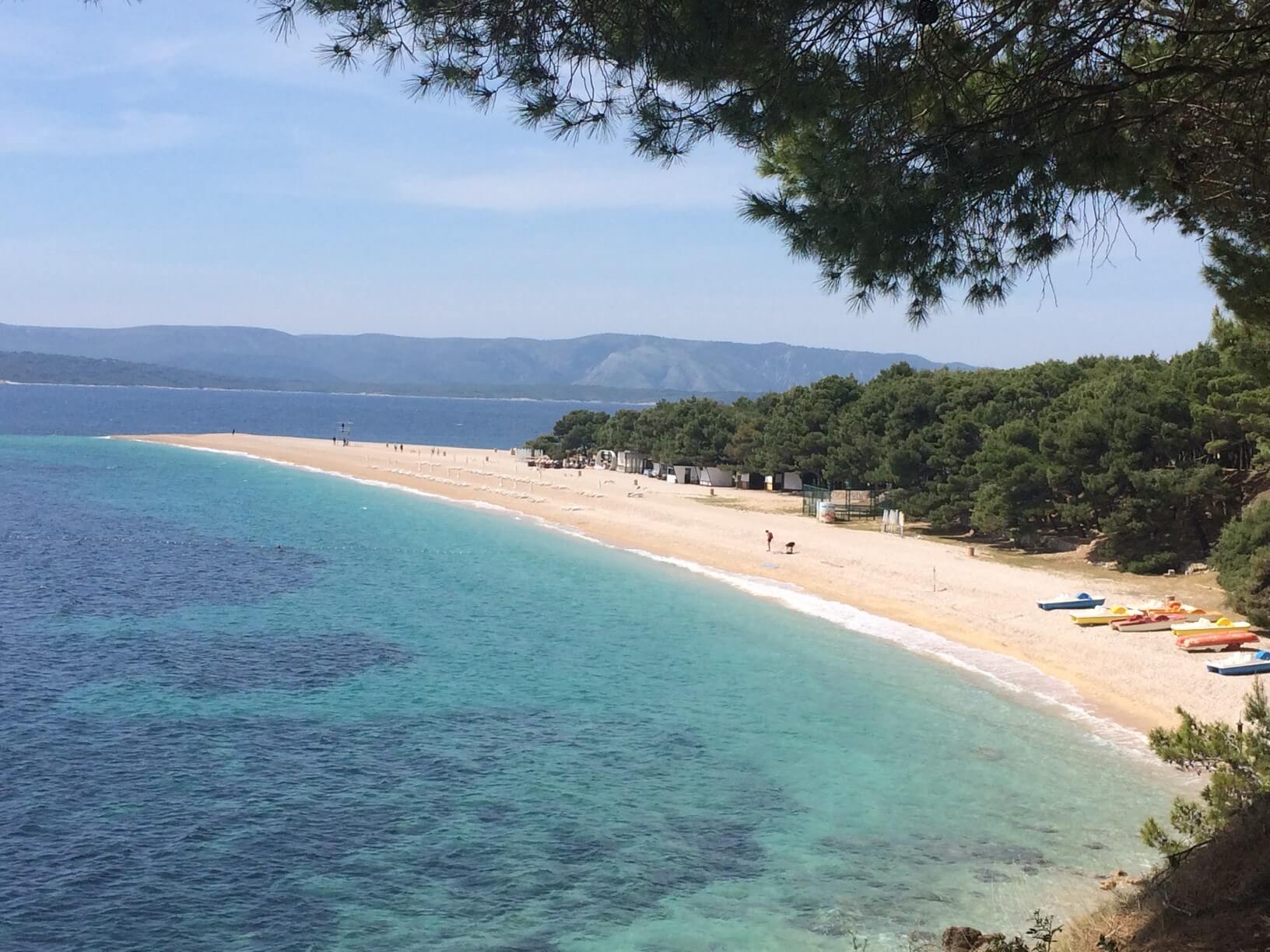 10) Last but not least, pack your running kit. Early morning runs around a town as beautiful as Split is every runner’s dream. I can’t think of a nicer way to see the town.

2 thoughts on “10 Best things to do in Split, Croatia”