Once upon a time (16 months ago to be precise) four good friends exchanged some hearty hugs, some slaps on the back(pack), and wished each other Bon Voyage. For the four friends were going in two very different ways – two (who we shall now call Marcito and Coggleito) were bound for a South American journey while Matty and the Monk (that’s me – I’m now talking about myself in the third person – awkward) were embarking on our Silk Road journey.

But all four carried something in common as they trotted in different directions across the globe. For in the depths of their backpacks each had a small sandstone rock, swaddled layers of cling-film and buried in clothes. The rocks ‘may’ have come from behind the urinal of their favourite Nottingham pub, which is built into the sandstone caves of Nottingham. It may just have been removed by one of the four friends who, armed with his Swiss Army knife, cut it from the wall before being breaking it into four mis-shaped pieces, already crumbling in his pockets, to give to his three friends before they went their separate ways. That might be where the rocks came from, but obviously I can’t be sure, nor can I be held to any account regarding any of the rocks’ complicated and ambiguous history.

As they hugged and put their heads together, the rock-cutter cried: “This is not goodbye, the rocks will soon be together again.” Matty and the Monk went east. Marcito and Coggleito went west. 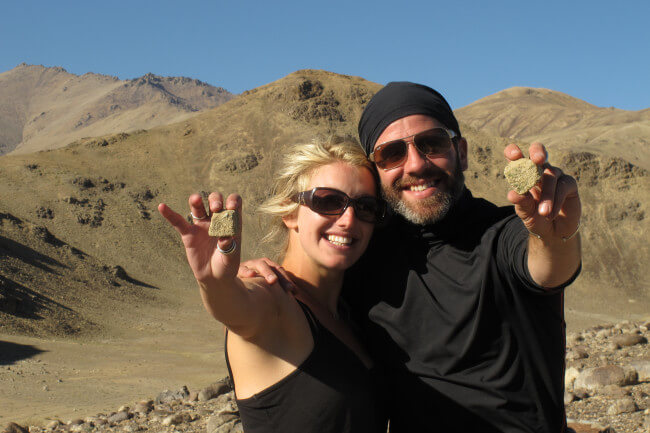 Proof that the rocks went East: Matty and I on the highest highway in the world; the Pamir Highway in Tajikistan

After many eastern adventures and a hard summer of working in Europe, Matty and I finally made it west. Specifically Ecuador. And we were not alone. Our much-anticipated reunion with Marcito and Coggleito had been a frantic one as Matty and I rushed to the airport to surprise them (cursing at the local bus as it slowly chugged up the high altitude hills of Quito as if oblivious to our imminent reunion) but also an emotional one as we caught them at an ATM machine at arrivals.

A couple of days later of sampling the local beer, route planning and squealing, and we were on the road; headed for what is known as the Quilotoa Loop – named after the beautiful high-altitude Quilotoa Lake.

We got off the bus to this view and wondered if we had perhaps peaked too soon.

We walked for about an hour or so around the lake in an anti-clockwise direction before somewhat begrudgingly leaving the beautiful view and entering what felt like an isolated sand-dune scene looking down into the valley below. The wind picked up and Coggleito, who had chosen the exact same moment to run down the sand dune, found her legs being carried by the wind until she found a grassy patch to slow down. 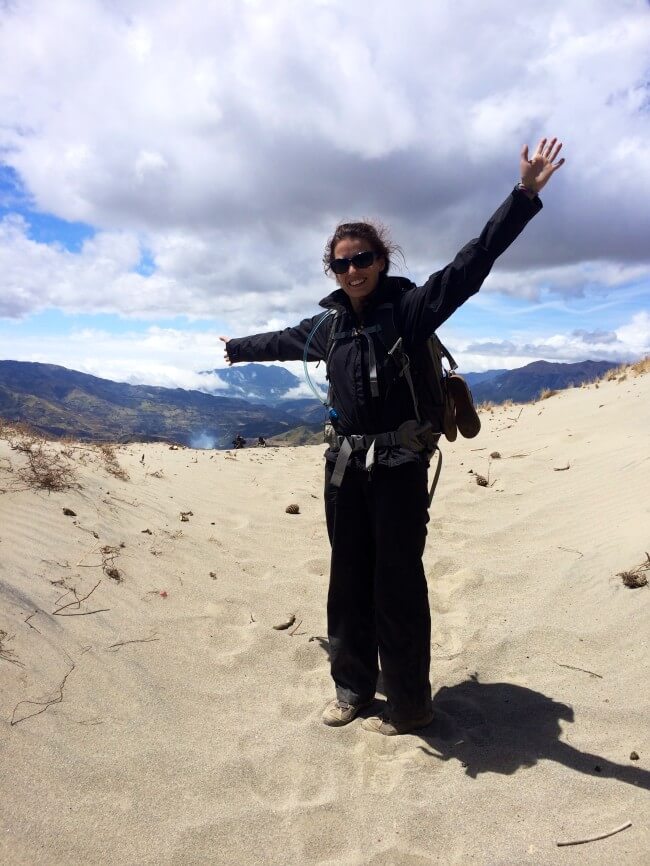 We spent the next two days climbing down into valleys and up out of canyons, passing dusty small Andes villages and doe-eyed cows as we trekked over green, luscious hills, crossing snaking springs and gushing rivers. It was one of the most varied landscapes I’ve ever encountered and made all the more pleasant by our much awaited reunion with Marcito and Coggleito (who are actually called Marc and Gemma by the way, but when in Rome…) 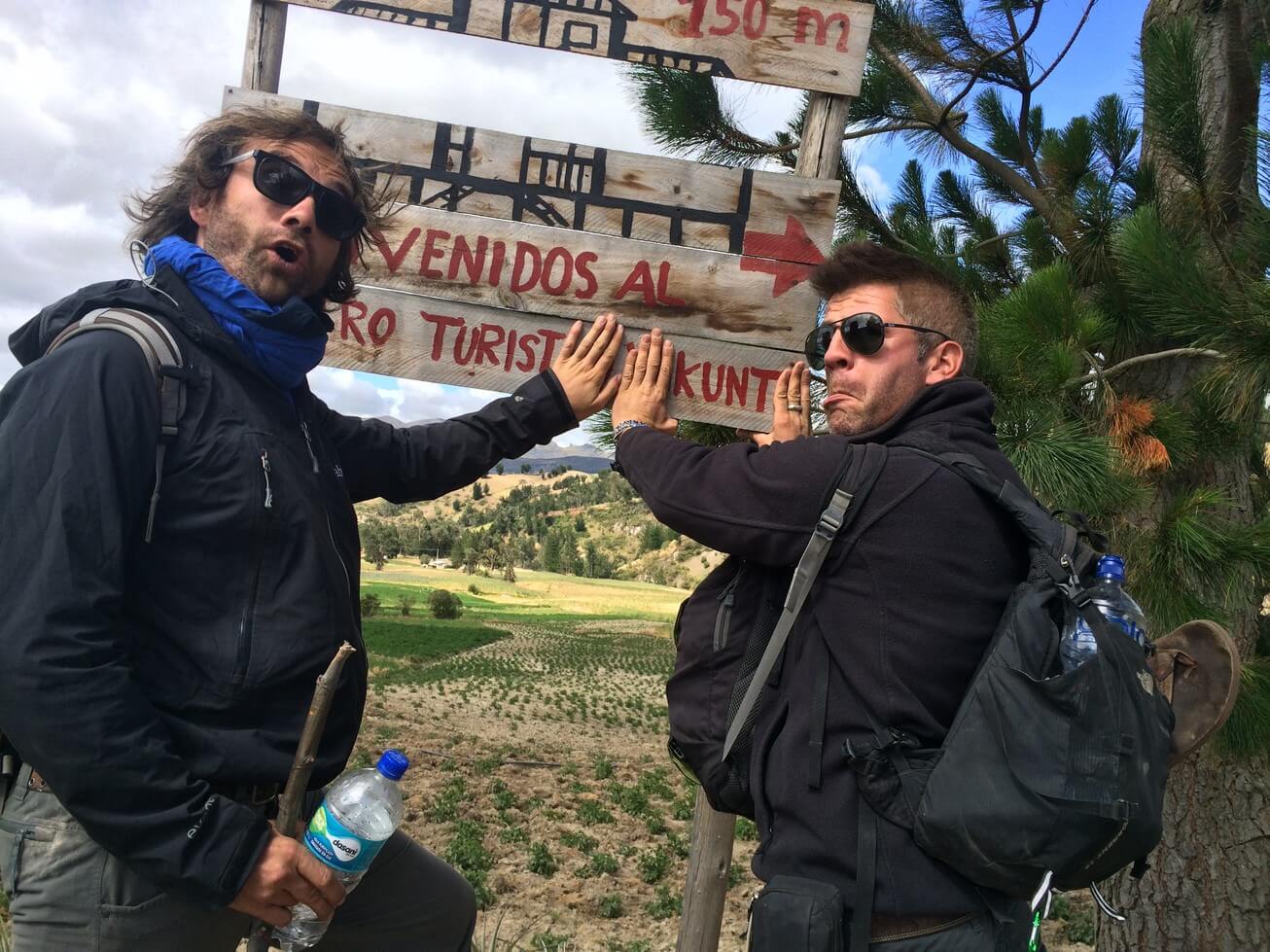 The boys being turist… ahem.

Another beautiful valley only marred slightly by knowing we had to cross it. 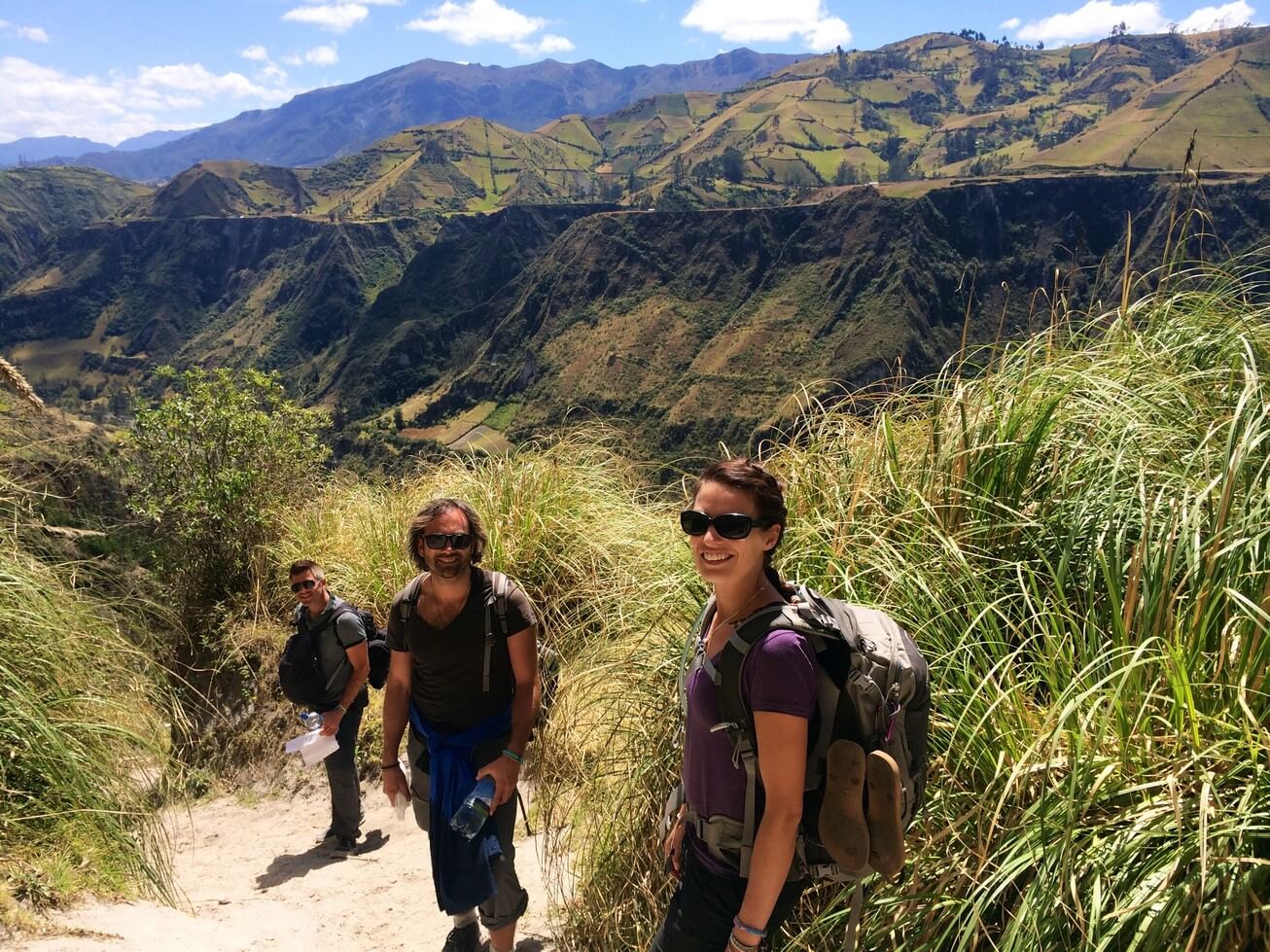 Sublime scenery with some smashing faces. 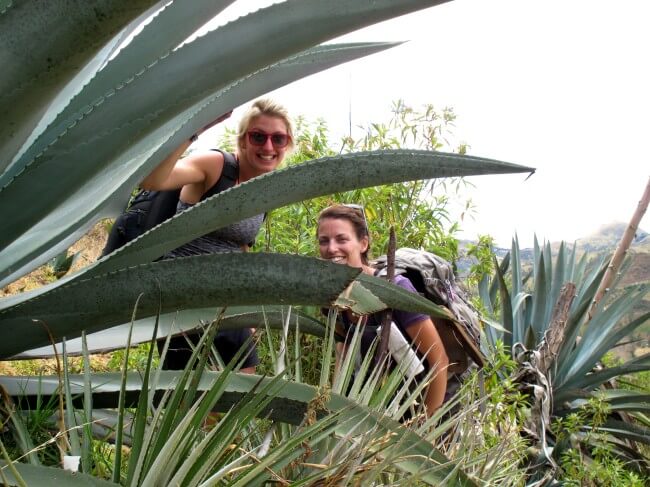 Coggleito and I hiding in the aloe vera

Coggleito’s ‘camel pack’ was much appreciated by the locals 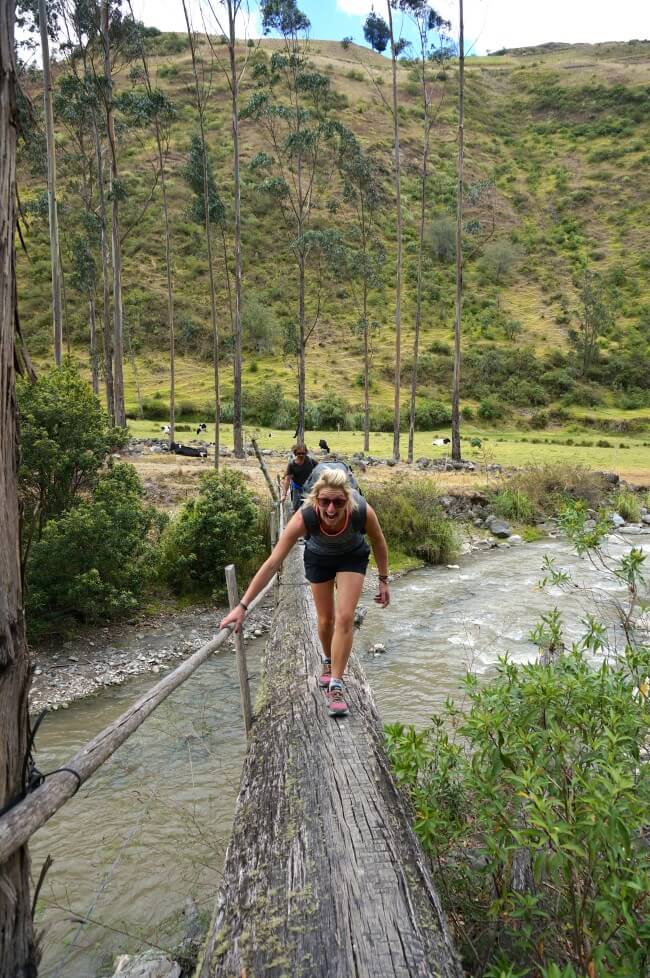 And when I said crossing rivers, I meant walking across precariously high logs. 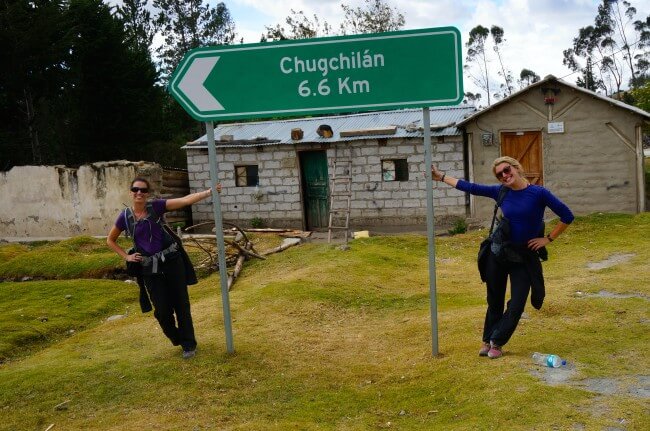 Our guide book warned that dogs can give walkers a bit of trouble on the route and sure enough as we passed remote farm houses we were greeted with barking and aggressive looking dogs that sent us scrabbling in the dusty ground for rocks and sticks to arm ourselves. Apart from the time when Matty was growling on all fours brandishing his stick at a particularly ferocious look dog that had been following us, we emerged relatively unscathed.

After two long days of trekking we checked into a hostel that felt more akin to a luxurious ski chalet in the Alps than a backpackers pit-stop in the wilderness of Ecuador. Tired and weary after taking two wrong turns on the six hour walk, we climbed up the last mountain to reach the Llullu Llama hostel in the tiny village of Isinlivi. A friendly Swiss couple who were volunteering to run the place at the time, greeted us with  big grins and proudly pointed out the hostels’ namesakes – two happy-looking, fluffy llamas that were trimming the grass outside.

Our brief tour of the hostel revealed the cosy dorm room, which had beds set into the rafters of the roof; cosy, bright and clean double rooms; a sparkling clean bathroom boasting a hot shower and a log-cabin-like communal room with a burning fire and huge dining table from which we were to eat a delicious feast of mammoth proportions a few hours later.

But better yet, in the grounds of the hostel, which is perched on the side of the mountain we had just climbed up, was a spa fully equipped with a jacuzzi hot tub, sauna and steam room. We could not think of a finer way to relax our aching bones and immediately went for a pre-dinner soak (not before a scenic beer of course). 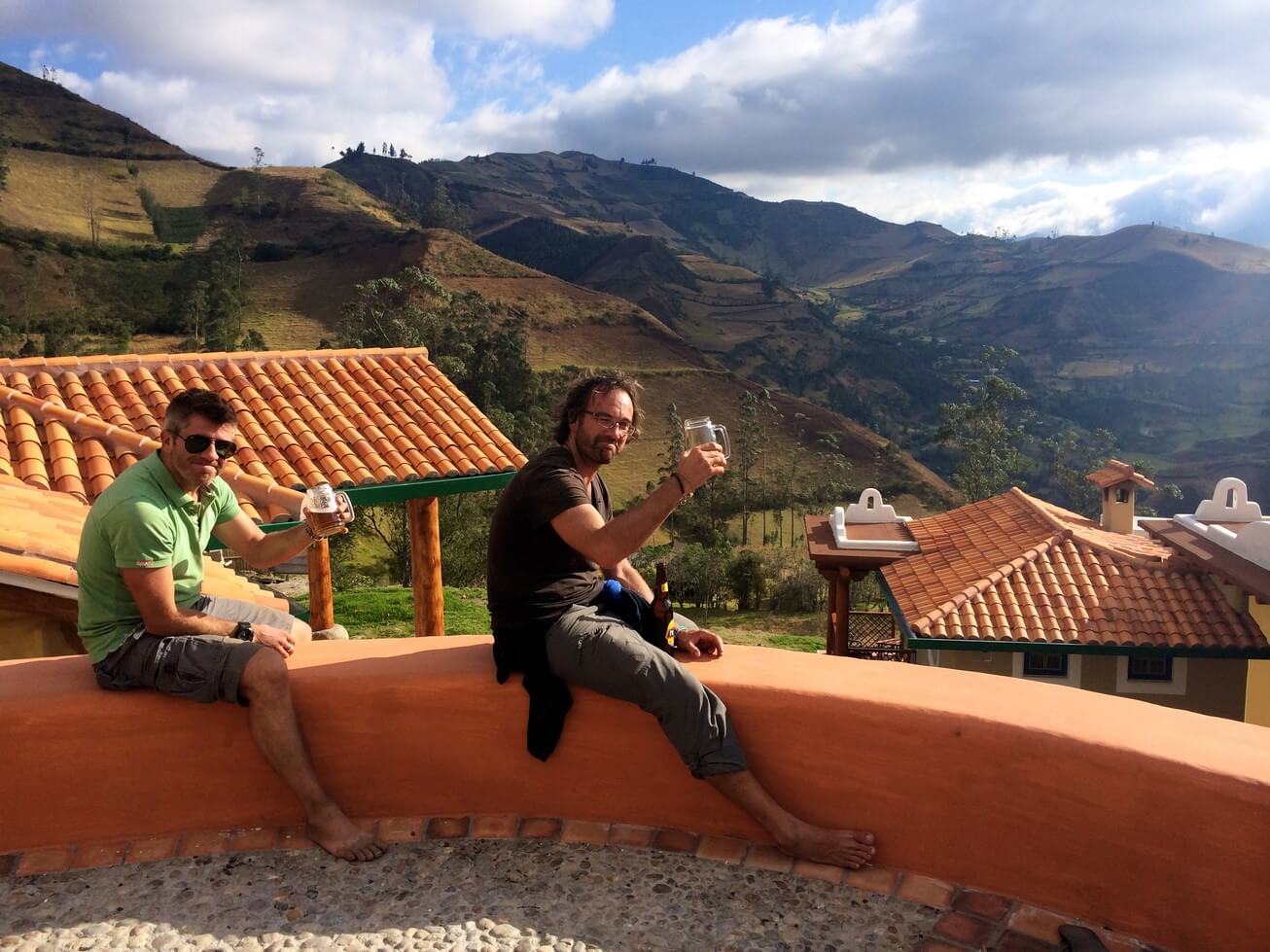 And of course breath-taking beers with not-so-shabby-scenery to round off each day. 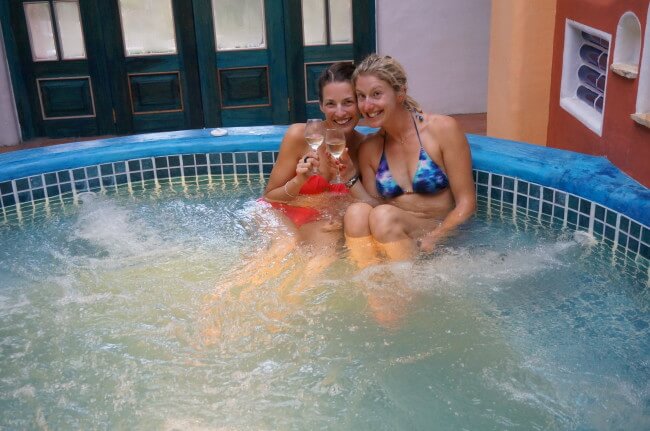 The next morning we woke, feeling refreshed and scrubbed clean, and set off for the last section of our walk, a 14km trek back to the village of Sigchos to catch a bus to Latacunga, where we had begun the journey three days earlier. As we scurried down dusty donkey trails and across green pastures, we continued to catch up on the last 16 months and exchange tales of travel and adventure.

As we paused on a  bridge to frolic for the camera, the rock-cutter cried: “Rocks reunited!” We all reached into our backpacks to pull out our cling-film wrapped nuggets of sandstone. Carefully unwrapping the stones, sand spilled from the wrappers, as if each grain had its own story – of another bump in the bag, another bus ride, another adventure.

We held up our somewhat shrunken rocks and were amazed they still fitted together like the missing pieces from a jigsaw. It was perhaps a little bit like the four travelling friends – yes, time had passed, stuff had changed, adventures had been had – but they were still all cut from the same rock, so to speak. 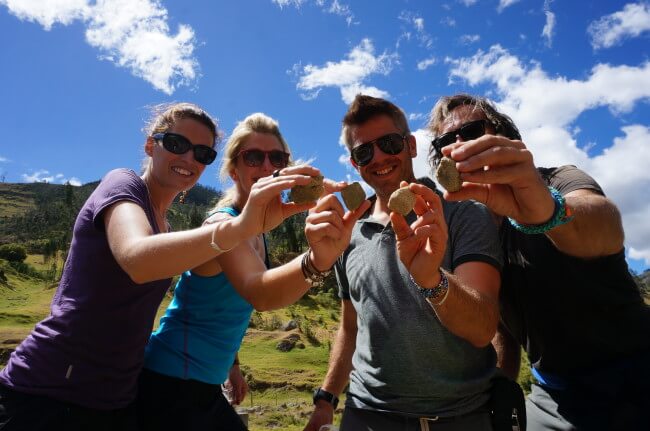 The Quilotoa Loop is the name that is given to the villages and towns that loop around Quilotoa Lake in the Andes, Ecuador.

We started at Latacunga, where we stayed for a night and left our main backpacks. The next day we caught the bus to Quilatoa, which runs from 9am in the morning. and takes a couple of hours It is only a short walk to the lake from here (be warned, it’s extremely windy and cold up here as it’s at 3,914metres above sea level and very exposed). At the lake we walked anti-clockwise and followed the trail to Chugchilan, which took about four and a half hours – here we stayed at a lovely hostel called Cloud Forest, which cost $15 for a dorm bed with dinner and breakfast.

The following day we walked to Isinlivi and stayed at the wonderful Llullu Llama hostel ($21 for a double with dinner and breakfast per person or $18 for a dorm bed). It cost $7.50 to use the spa for an unlimited time and was worth every penny.

On our last day we trekked to Sigchos, which although was the furthest distance (14km) it was the shortest trek as there were more flat stretches. We left at 9am and then caught the 1.30pm bus to Latacunga to be reunited with our belongings and complete the circuit.

Most hostels offer packed lunch for the following day’s walk but we stocked up on tins of tuna and snacks in Latucunga and then bought the odd boiled egg and bread rolls from hostels.

The terrain is mixed an incredibly beautiful – wear decent walking shoes as there are plenty of steep uphill and downhill stretches. It’s quite easy to get lost on the route but most hostels have trekking instructions and maps available – don’t set off without these! Look out for the red marks on stones but we didn’t really notice these on the first leg of our journey.