I know you should never say never but… I never plan to jump out of a plane or do a bungee jump. Never. It’s just not my cup of tea. And talking about tea, that’s exactly where I’d rather be – with two feet on the ground below drinking a good cuppa tea watching the crazies fall from the sky.

But a swing? What could be so dangerous about a swing,  I asked myself as we made our way to the Swing of the End of the World near Banos, in Ecuador. Even with its slightly disarming name, it was not something I actually thought I could be scared of. 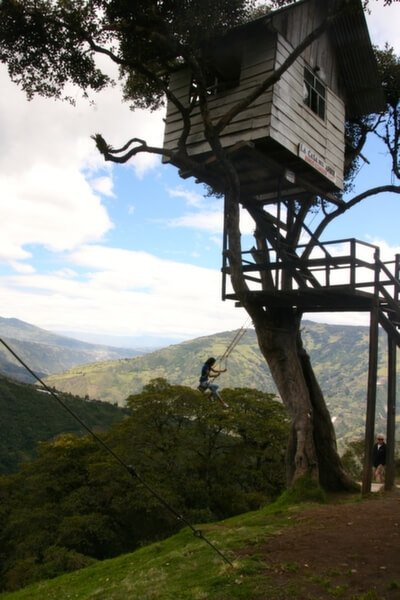 This is The Swing at the End of the World

Swings are for children after all. I still remember my childhood swing with great fondness; it had a big plastic red seat and hung from what looked like a giant metal structure (to my child-sized eyes anyway) that was nailed into the grass in the back garden. I remember having pre-pubescent tantrums about only being allowed one chocolate Penguin bar a day and burning off my steam and fury on that swing. Back and forth I would go…. Up and legs out, down and legs tucked under my seat, with almighty gusto to get me higher and higher. I wanted to get the bird’s-eye view into the tallest nests in the trees, I wanted to swing right over the metal bar at the top of the swing so my dad would have to use huge ladders to unravel it, I wanted to touch the clouds. But despite my very best and most earnest efforts I never quite sailed over the clouds.

So when my friends Coggleito and Marcito, who we are currently travelling with, told me about the Swing at the End of the World my eyes naturally lit up.

“I can swing as high as the clouds? Over the trees, as high as the birds?” I cried in the most high-pitched voice that I could manage (to anyone who doesn’t know me I often have a fairly ‘husky’ voice).

Either way, I was excited. Not scared. Or at least I wasn’t initially.

We drove from Banos, snaking up a mountain where the Swing at the End of the World sits. When the taxi came to a halt we climbed up a small hill and through a little wooded area. As we emerged from the trees we were greeted with a spectacular view over the forested valley below and, hanging from a treehouse, sat the Swing at the End of the World. It was swinging from a huge pole that went through the roof of the tree house. The long, long ropes, ended with a plank of wood for a seat and a man stood beside it grinning. He was the Swing at End of the World Pusher – and what a job title that is.

There were a few more tourists than we expected  – apparently word had got out – and we noticed a queue of sorts for swing, which we joined. (Well I say we – Coggleito and myself got in the queue while the boys got in position with the cameras).

I watched the girl at the front of the queue strap herself into the swing (and felt a sense of relief to see there was a small rope and clip that also goes around your front) and watched as the the Swing at the End of the World Pusher pulled her back high, higher than his shoulders as he leaned forward and gripped into the ground with his toes to steady himself. Then he raised her even higher before throwing his entire body weight against the swing and throwing her into the distance. She squealed as she swung over the valley below, before returning to the Pusher who sent her out into the valley even further with his next push.

My palms were sweaty and my stomach was churning as I asked Coggleito what “just a little push” and “stop” were in Spanish.

There was a fairly liberal queuing system going on, and as a large woman pushed to the front for the second time to put her two small children under the age of five on again (who looked like they were going to slide right off and down into the valley below) my nerves got the better of me and I shouted something in completely incomprehensible Spanglish whilst simultaneously tutting and shaking my head. My dear friend The Mongoose, who once declared, ‘the queue is the great leveller of society,’ would not have coped well.

The next girl to push in front of me placed herself on the swing backwards, so she was facing us and not the valley as she swung out. I looked at her face and saw to my horror that she was actually crying. Eventually the Pusher pulled her to a stop and she stepped off the swing shaking.

I looked around, trying desperately to find someone else to jump in front of me. But there was no one. The Pusher smiled at me and motioned for me to come forward. I gave him my manic-frozen grin that I reserve especially for these situations. It was my turn.

I placed myself firmly on the seat, clipped myself on and retained my manic grin.

“Si, si,” I managed to reply. I forgot to ask for a small push, as I was pulled back, I forgot what the words were for ‘stop,’ ‘I don’t like it’’ or ‘get me the hell of here’ and before I knew it I was flying forward over the valley beneath. 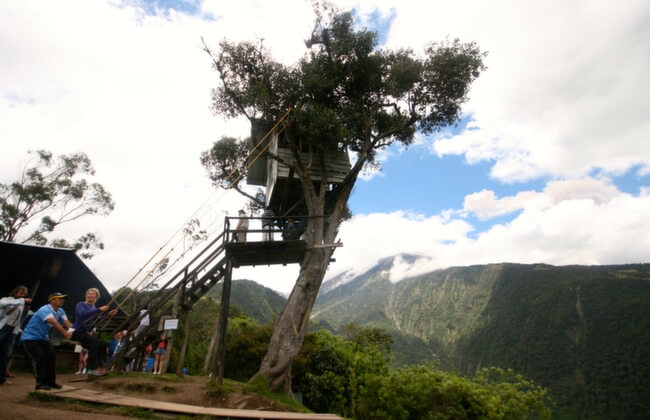 As I flew over the valley and tried to touch the clouds with my outstretched legs, I screamed, ‘Si, si’ and wished I knew the words for ‘faster, faster’. It was exhilarating and everything I had hoped my childhood swing would one day deliver. 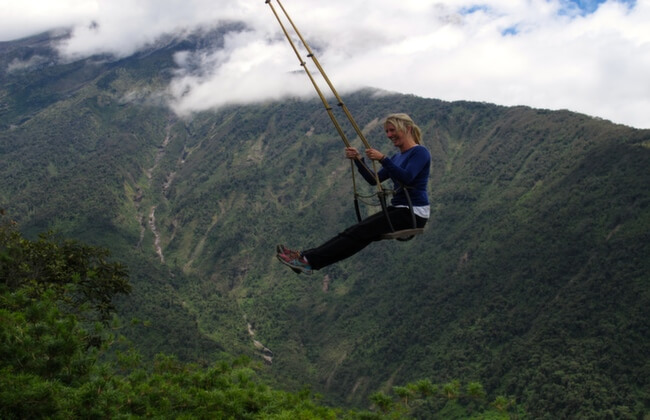 Wheeee, wheee, I screamed (in  Spanish of course)

The Pusher, sensing my enjoyment from my hearty cackles, sent me spinning on the next push, so I was turning on the ropes as I went hurtling through the air. On my return swing, now facing the waiting crowd instead of the valley, I nearly sent the Pusher to the ground with my feet – but like a Boomerang, I quickly swang back out over the valley. 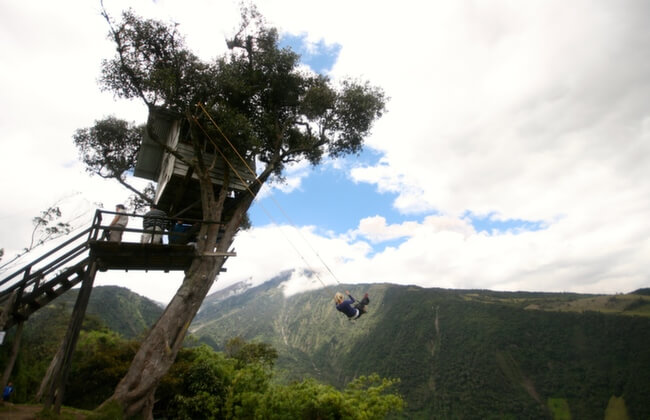 That’s me – the tiny dot – over the abyss below 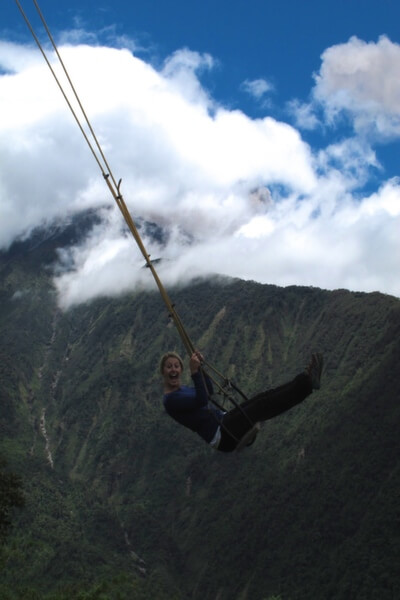 I NEVER wanted it to end

At some point, which in reality was probably just a few seconds after the fun had begun, I sensed myself slowing down and eventually the Pusher gripped my seat and pulled me to a hault.

I stepped off shaking and grinning, looking just as manic as when I had stepped on – but shaking with exhilaration. I may not be the next in line for a parachute jump or a bungee jump but anyone who says swings are for sissies need to get themselves to the end of the world before they make such claims. 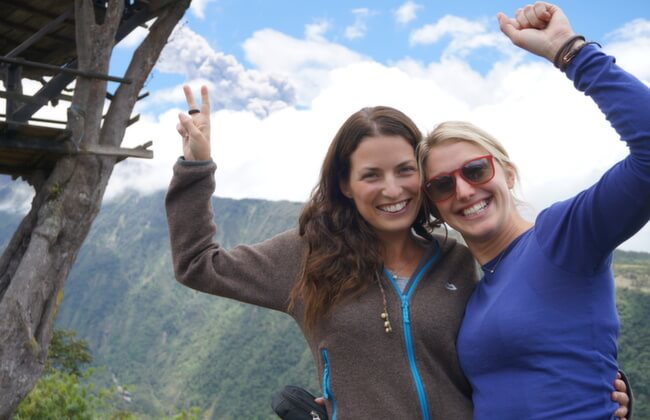 We did it – we conquered the Swing at the End of the World!

2 thoughts on “The Swing at the End of the World, Ecuador”