Today I want to take you somewhere truly mental. Ordinarily you would need a 4×4 jeep, a reliable compass and a boot full of provisions for such a journey, but if you have a cup of tea or coffee to hand and a sense of adventure that will also do nicely.

We’re going to the Darvaza Gas Craters in the middle of the scorching, barren deserts of Turkmenistan. I think you’re going to like it.

The adventure begins in Ashgabat, a city full of truly bizarre and ostentatious monuments, but things are about to get weirder. After breakfast you lug your rucksack into the big (air conditioned!) jeep outside. The air conditioning is a significant luxury, you are taking on Central Asia’s hottest desert in 45 degrees and the sun-scorched sand dunes are a somewhat intimidating prospect.

You mutter something about picking up some water sooner rather than later after realising supplies are low but are scoffed at by your fellow travellers who think you are somewhat paranoid. They laugh and say ‘no sweat’ and unhelpful comments like that. But you eye the rapidly reducing water supply suspiciously, remembering only too well the recent memories of being ‘lost at sea’ in the Caspian Sea. Ok, you weren’t quite lost, but it was dramatic nevertheless.

The city is soon left behind in a trail of hot orange dust and the road ahead cuts through swathes of brown, beige and orange flat sandy terrain. Nothing can be seen except different shades of brown with the odd camel or donkey for company.

Then suddenly the car just fizzles out. There’s no dramatic bang, no explosion and drama, just the slow purr of an engine dying and the sound of a hand slapping the steering wheel.

“Machine ist kaput,” says Alec, your driver. It’s the first thing you’ve heard him say and it’s odd that it’s German but your guide tells us this was a commonly used word in the Soviet period.

“Oh,” you reply, somewhat glad you understand why your Turkmen driver broke out in German but nevertheless still a little put out by his news.

You watch as they take their phones out the car (they have three between them) and wave them in the hot sun rays from the top of a sand dune. You’re not sure what will happen first, if the phones will melt or they will get signal.

But then your guide returns looking pleased with himself as his phone was the victorious one. Another driver is coming for you and you need not worry, he may only be 45 minutes because he ‘drives like a maniac’, you are assured. Wonderful.

Somewhere between the German speaking and the phone waving the air conditioning has been turned off and there is no sign of it coming back on. So you lethargically peel your hot, sweaty body from the now sticky leather seats, cursing yourself for bringing so many black clothes on a desert summer holiday, and look for some shade. You eye up shrubs that are a little taller than others in hope of finding a shadow big enough to curl into, like a desperate snake that needs to shed its skin in cool, dark hole.

It turns out there is a little derelict railway station over the road with ample shade. The guide even gets out some blankets and offers you some tuna. The boys get out the iPad and a game of Trivia Pursuit is soon underway. But you wonder how long it would take until you would happily trade in an iPad for a bottle of water. Thirty minutes, you conclude. 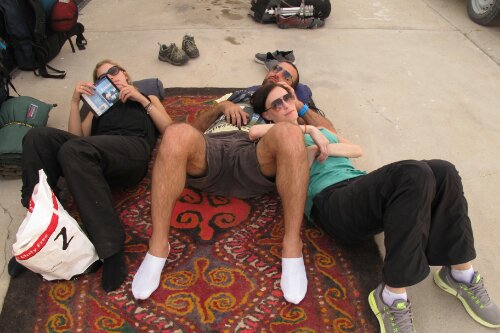 The next half an hour is spent trying to ignore your pounding head as you swallow two paracetamols with the last dregs of the water. Then just when you’re considering grabbing a camel to go in search of provisions, the rescue mission arrives and after transferring the bags and camping equipment you are on that bumpy beast of a ‘road’ again.

50km later you finally reach the first water stop and, ignoring your fellow travel companions, you decide to buy enough water to keep a small herd of camels alive for a week or so, whilst muttering something about being right all along.

Now the sun is getting low in the sky and it is time to push on. Another hour or so later, your driver turns off the main road, and stops by a huge hole in the dessert.

You jump out, and gaze down into a deep, deep crater, full of emerald coloured water at the bottom. It’s a long way down and it’s somewhat ironic to see all this water lying deep beneath the scorching desert plains.

But the next crater, just 10 minutes or so away, is every better. Just as big, but stinking of rotten eggs, this crater is full of bubbling mud that made a curious gurgling sound as you snap away with the camera.

The craters were all created in the 1950s, apparently a consequence of Soviet era gas explorations. Turkmenistan is seemingly riddled with gas supplies, as I mentioned before, residents don’t even pay for gas here – it’s completely free.

You’ve seen pictures of it and even had a little peek at a YouTube video but nothing, I repeat nothing, can prepare you for what you are about to see.

To reach this crater you’ve been ‘off-roading’ for more than half an hour, climbing up sandy desert dunes and dropping down the other side in the jeep, which despite its sturdiness still feels a little precarious in the deep sand. And then suddenly, the final crater emerges. You can see the red glow and can smell the gas as soon as the car door is opened.

It smells like someone has left the gas on for a long time. It looks like the world’s biggest bonfire or the burning pits of hell. Suddenly you understand why fire was worshipped in times gone by. It is, quite simply mesmerising. 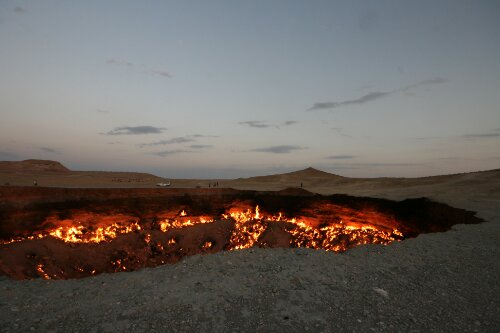 You stand there with your travel companions, gazing into the deep 70 metre by 50 metre crater watching the flames jump into the air, licking the sky. The wind changes and suddenly the heat and smell is unbearable, forcing you to turn the other way and close your streaming eyes.

But almost just as quickly you turn back again to gaze into the pit. Everyone is worried someone will fall in so you stand a good metre or two away from the edge as you walk around the crater in an anti-clockwise direction. You talk about how long you could survive down there and discuss whether it would be worse to fall into the pit of fire below or a great hole of slurry. Opinions are divided. You walk a little further from the edge.

After setting up camp a few hundred metres away from the crater (it’s not safe to camp closer), you return to the fire to watch the last rays of light disappear from the sky that is now illuminated only by the raging fire below. 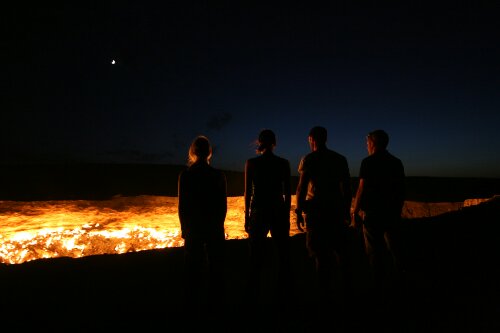 After returning to camp for a delicious barbecue dinner, where you enjoyed tender pieces of charcoal grilled chicken and vodka in almost equal measures, you feel yourself drawn back to the burning inferno of the crater. Now the warmth from the wild flames is more welcome as the chilly desert air whips around you. For some reason you do a devil dance, which is filmed by your bemused travel companions. You’ve probably inhaled too much gas. It’s time to drag yourself away from the fire again. 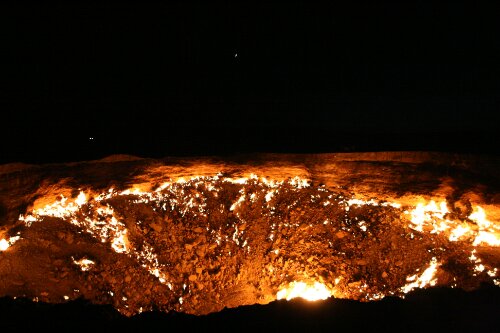 Few things get you up before sunrise, but the fire does just that. Rubbing your eyes in a sleep deprived manner you find yourself wandering down the path to the crater once more. 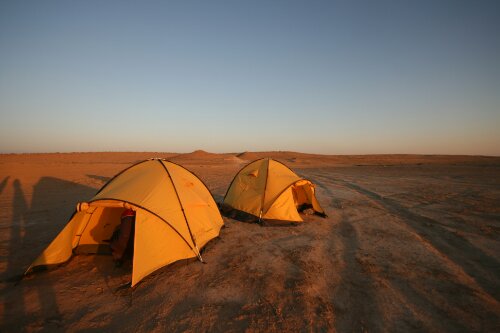 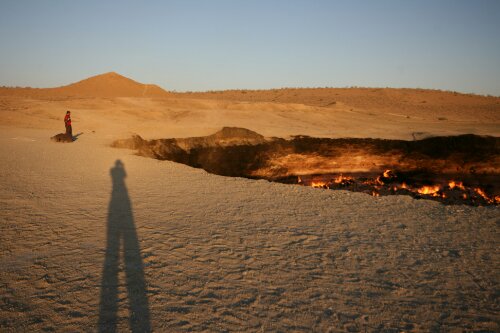 The sky is a very pretty, pale blue as the sun makes its first hellos of the day. The fire jumps and blazes away angrily as if to remind you it has not slept at all for 60 years. It is just as menacing as in the thick of night. 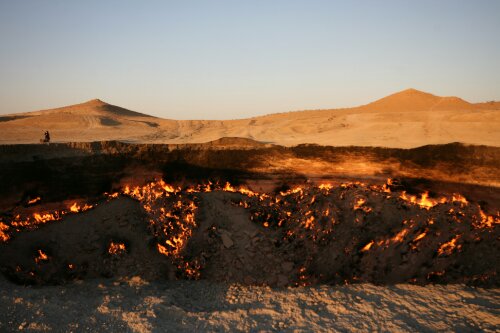 And then, somewhat reluctantly it is time to say goodbye to the flames, pack up and drive the last, bumpy stretch of the Turkmen desert to get to the Uzbek border in good time. But that’s ok because you’re kind of in a fire trance for the best part of the journey.

And then two days later, when you’re in another country – another world, you realise it’s all still happening. It’s still blazing away. And that someone else may be devil dancing around it. And that is when you conclude that the burning Darvaza Gas Crater is probably the most mental thing you’ve ever seen.

Warning: Travelling Turkmenistan is expensive and intensely bureaucratic to organise. You can either apply for a ‘transit visa’, which can take a few weeks to come through and only allows you to spend 3-5 day in the country or a ‘tourist visa’ which can be picked up in a day with a letter of invitation, and in our case gave us 20 days in the country. One massive downside of the ‘tourist visa’ is that you have to travel with a guide and driver at all times except in Ashgabat so expect to pay $100 – $150 per day.

We opted for the latter to see as much as possible so our excursion to the craters was included. We booked with Stan Tours, as recommended by most people online and the Lonely Planet.

To be perfectly honest we were disappointed with our guide who failed to bring the country to life for us and at that pricetag, you expect that.

Tents, dinner and breakfast at the campsite were all included in our tour cost – although we had to pay $10 extra each for a sleeping bag, which felt a little bit cheeky.