I feel a little bit like I’ve just broken up with somebody I still love.

We had some good times over the past five years, some bloody great times. You took me to places I would never have otherwise seen, you made me laugh, made me mad… And made me swear like a trooper. You were my life, my world, my everything. You were demanding, challenging and impossible at times, I hated it when you kept me up in the middle of the night.

I think I’ve done the right thing, I think it will work out for the best – for both of us. I just need some time on my own, to explore new lands, be selfish for a while. It’s not you, it’s me. Well, it was you a little bit, but let’s not get into a fight. Not now.

I can’t remember my first day as a reporter. I think I probably arrived early, with freshly washed hair (that was a bit too flat on my head according to my security pass), dressed in a clean, pressed shirt, pushing my glasses up my nose with enthusiastic keenness.

In fact my only vivid memory from my first week was when, after spending about 20 minutes trying to work out how to submit a small piece of news that I had laboriously typed up, I timidly turned to the girl next to me with short, dark hair for some advice. She was laughing with another reporter, while typing furiously and I decided I wanted to be her friend.

‘No worries,’ she said, as she helpfully started pressing buttons on my keyboard. We both watched in silence as she accidentally hit “delete” and sent it to story heaven, where it spent the rest of its days alongside legally questionable investigations and adjective-heavy crime stories. She was mortified, I was desperate to assure her it was fine. She bought me a Crunchie, and I made my first friend. 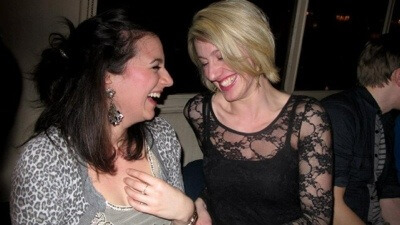 This is us a few years on. Her hair got longer and mine developed some volume.

I wanted to be a journalist ever since I was about seven years old when I thought it simply involved being paid to make up stories (note to Nottingham City Council – this is NOT what we do). Back then I was rewarded for spinning a yarn at story-time with a carton of milk on the carpet. That was good, being paid would be better, I thought.

Fast-forward some 15 years and I was walking into the news room for the first time (with flat hair), clutching my shorthand guide.

I remember my first ‘big story’. The atmosphere in the newsroom shifted from chattering banter to passionate and enthusiastic obscenities. Word had reached us that Harworth Colliery in north Notts was reopening.

With hundreds of ex-miners still unemployed in the county this was big news. ‘Fu*kin’ big news,’ declared one of the editors, as he told me to get up there as soon as possible for the detail. A correspondent was handling it from the office I was assured, who would be putting the spread together and look into the history of the site. I just had to get the detail on the ground.

‘No probs,’ I agreed, desperately trying to recall some knowledge about coal mining. As I sped up the M1 I played conversations with my Welsh nana over in my mind, she had told me so much about mining, but I couldn’t remember a thing.

I soon arrived at the site and was greeted by barren, brown land, scattered with a few industrial buildings. As I walked away from the car, unsure where to head, someone yelled, ‘Press?’ and I was swiftly escorted upstairs, into a board room of VIP coal people. There sat the chief executive of UK Coal, trade union leaders, Colliery leaders, I lost track… Job titles blurred into names and names into companies.

I introduced myself and shook hands with a lot of faces in suits.

‘So what exactly are you planning to do here?’ I asked, with confidence that I didn’t have inside. They started telling me and as I listened, enthralled by plans that seemed to fly in the face of history, the questions unravelled and soon I found asking about things I hadn’t even known had existed just minutes before. I left with enough material to write a small book on Harworth. And that is probably the best way I can explain journalism to you. 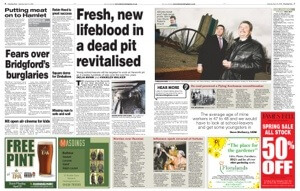 For the next five years I remained at the same regional daily newspaper. Until yesterday that is, when I packed up my shoe collection from under my desk and walked out the doors for the last time. And what a roller-coaster it’s been. Few jobs take you into the heart of Nairobi slums in Kenya, take you face to face with Gordon Brown, or give you the chance to talk to plane crash survivors who have never before spoken of their ordeal.

As a journalist it is your job to step into somebody else’s life and tell their tale. It can be both a terrifying responsibility and immense privilege, and one that often leaves you flying by the seat of your pants. 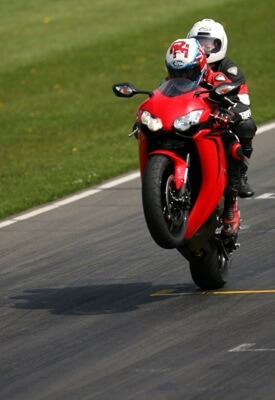 Quite literally sometimes… me with Ron Haslam doing about 120 mph at Donington Park. All in the name of a story.

But if there’s one thing journalism has also taught me it’s that life is short and you’ve got to grab it while it’s here… (the stabbings, shootings and suicides may also have made me a morbid cynic but let’s not go into that). So it feels quite appropriate that one of the last stories to be printed in my name will be that of Miles Hilton Barber, a blind adventurer who has climbed some of the world’s highest mountains, crossed the entire Qatar Desert in 78 hours without sleeping and even flown himself from London to Sydney. It is also apt that my other final story is about Justin Bieber. Like I said, it is a roller coaster. 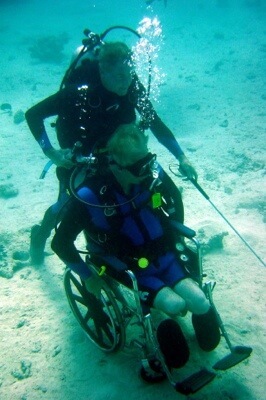 This is Miles, guiding a man in a wheelchair along the bottom of the seabed. His motto in life is: “The only limits in our lives are those we accept ourselves.”

So, journalism, it’s not that we’re breaking up as such. We’re just taking a break. It is time for me to push those limits, and take on new challenges. Perhaps then we will work even better together. 3 thoughts on “Dear Journalism: We’re not breaking up, I’m just taking a break”