I’ve met plenty of people who have visited China and returned home a little disappointed.

They walk back into their local, order a stiff gin and tonic, and talk in dark tones about people spitting on the floor, the lack of dragons, people not abiding by society’s great leveller (the queue) and worse yet, the food not living up to expectations.

“You know China Town in Soho,” they ask. Everyone nods expectantly. “Well it’s NOTHING like that,” they reveal to the sounds of gasps of horror from around the table.

All sorts of ghastly tales then follow about eating mystery meat, strange broths and missing dogs.

Now I have been in China for less than one week but I can confirm the spitting is disgusting, the queues need working on and I’m still dragon hunting. The food, however, has been nothing short of fabulous.

But I have a solution. Allow me to present the ultimate five step guide to ordering the best food in China*. Drum roll please.

Step one
Buy a ‘hard seat’ ticket for an unthinkably long train journey. We took one for the 26 hour journey between Kashgar and Turpan, which worked out just perfectly. 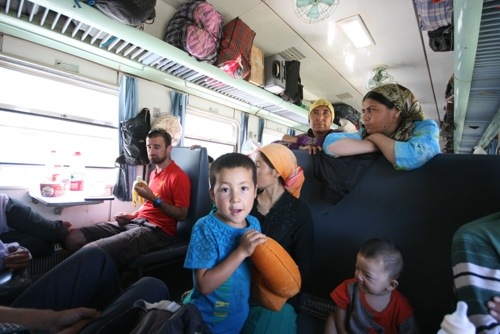 (The Mongoose, as pictured on the left eating a banana, was particularly impressed).

It is imperative the journey is both long, uncomfortable and full of small children and babies with no nappies on. You will be forced to get ‘close’ to those around you as the naked babies are passed around and your rubbish is thrown out of the train window by smiling strangers before you can say: “Wait no, save the world!”

Step two
Make a nice Chinese friend who can speak English. The above conditions will bring you together in a way that a posh, private ‘soft sleeper’ bed would just never do.

It is important your new friend is nice as you’ll be spending a bit of time with them from now on (see point three). We opted for a lovely girl called Jialil, who also went by the English name of Annie. 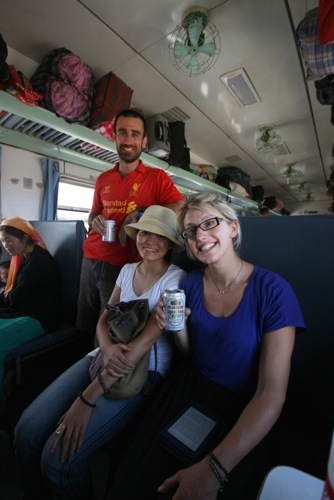 Obviously your friend does not have to be a girl, a boy would suffice, but we all know girls are more resourceful (see point four) and generally better than boys in every way so I recommend going down the female route.

Step three
Kidnap them. There are a number of methods for this but it is essential they do not feel like they are being kidnapped, perhaps let them believe you are inviting them to join you on your journey, or that you are in love with them. Whatever it takes. 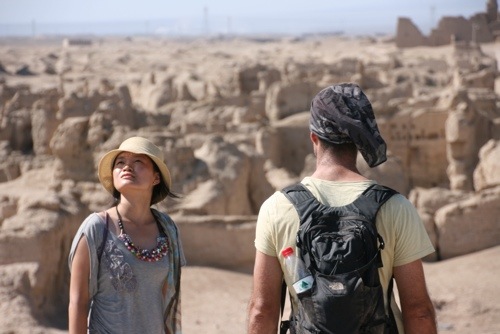 See, we took Annie out to Gaochang old city and everything.

Step four
Now this is the big one, the whole reason you got on that filthy train carriage in the first place and kidnapped a nice Chinese woman. This is crunch time, it is time for step four: gently suggest your new friend chooses a spot for lunch and/or dinner and that they go through the menu and select the dishes for you.

We struck gold. Annie chose a grape-adorned cosy spot besides Grape Valley in Turpan. And while she ordered the food, I was fed juicy, sweet grapes. Heaven I tell you, heaven. 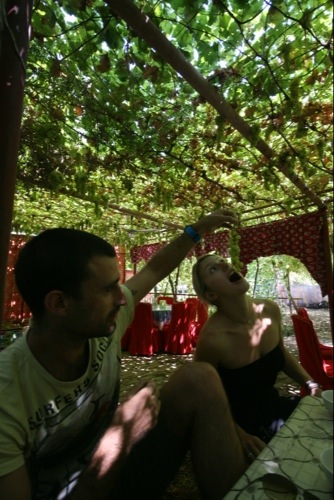 Step five
Eat. It is time to reap the rewards of your hard work. With any luck, your table will soon be covered in an array of lip-smacking, spicy, Chinese fare. We lucked out, in fact I will be so bold to say it was the best ‘local meal’ of the trip so far.

First up was a dish that we have come to know as Plov from our travels in Cental Asia, but goes by the name of shou zhua tan in this neck of the woods. A huge plate of fried rice with soft onions and sliced carrots tossed through it, topped with small pieces of tender lamb that fall apart in your mouth on first touch with the teeth. It works, as I’ve mentioned once or twice before. 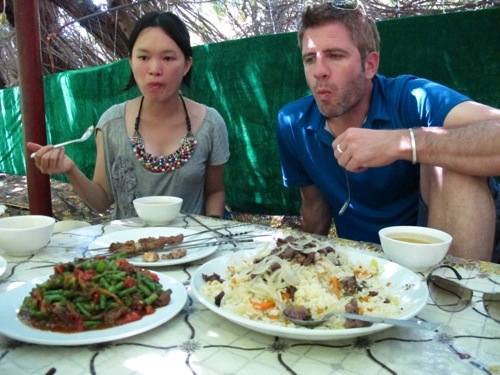 Food shots should always be glamorous.

As we were swooning and groaning over the huge dish placed before us, with four spoons standing erect in the rice (I love being able to use that word now I no longer work for a newspaper), the second dish made its arrival. 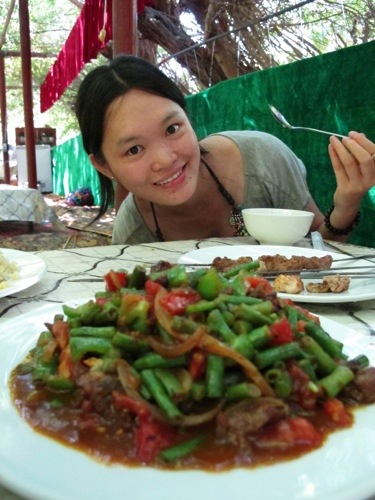 I want to call this dish a ‘sort of black bean sauce-based green bean and chilli delight’ but that does not do it justice. Because, you see, it didn’t actually taste of black bean sauce (the kind that comes thick, sloppy and too rich in most Chinese takeaways back home) – but you just sort of knew this had black bean roots.

Let’s start at the beginning. The green beans were chunky broad beans, fried in a delicious marinade that saturated their skins in flavour and turned them wrinkly while retaining their crunch – all in the same bite. Tossed with tender slivers of beef, there was a ‘black bean’ flavour, a huge chilli sensation, a garlic kick and eventually my taste buds just sort of collapsed and stopped trying to figure out the ingredients. The Chinese call this dish jiang dou chao mou.

My chopsticks could not move fast enough. This is both a wonderful and terrible reality. Great for the digestion, not so great for the Guts in me. (Guts is an alter ego who rears her ugly head when good food is around, she creates a right scene, makes me eat like a pig and occasionally takes it to such lengths that I have to retire to bed for the evening. I fear she may have her hey day in China).

While my chopsticks were busy trying to answer to Guts’ endless demands, the next two dishes were delivered. Lamb kebabs and an egg and tomato dish. But this is lamb, tomatoes and eggs like they’ve never been seen before.

The kebabs (yang rou chuan), were heavily spiced but beautifully tender. Inevitably there was the typically Central Asian huge hunk of fat that sat on each kebab, inevitably pulled off by us and left on the side, but the rest of the meat was delicious.

And finally, the eggs and tomato: The dish I almost turned my nose up at when it was placed in front of me. “Eggs?!” I felt like crying, “I get eggs at home, take them away!” Fortunately Guts was more in control at this point so she just dug her chopsticks in and gobbled away. 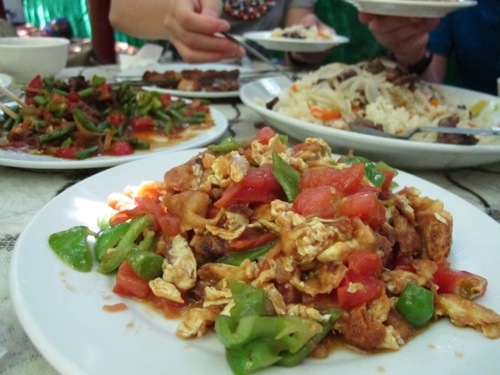 I was rewarded with what was essentially a richly seasoned omelette, dripping in the sweet juices of ripe tomatoes, salt, pepper and garlic. I might have licked my chopsticks a little too keenly.

Oh sorry, I sort of forgot I was writing a five-step guide then, I got a little lost in it all. But yes, I suppose that brings me to the end of the guide. Anyway I hope it is as successful for you as it was for me (and Guts), please excuse me for the time being… I have friends to make.

*Disclaimer: Some people just like dog broth and I can take no responsibility if your new friend is unfortunately that way inclined. Bad luck. Try again.