I have to admit I was a little bit confused when walking into the Contemporary for Petebox’s ‘gig’ last week. Expecting to see groups of people huddled together, clutching their beers in anticipation of the long-awaited show, I was surprised to find the room had been transformed into an auditorium with raised seating facing a large cinema screen.

Somewhat baffled we took our seats. For those of you who don’t know PeteBox, he’s a local lad who makes incredible sounds with his mouth. He can bop, he can beat, in fact he can make his voice sound like almost any instrument imaginable. Then he records each sound as he goes, looping them on top of each other to get the full effect. And last Friday it was the launch of his first album. Having released each song on YouTube, it was finally time to launch Future Loops – and I was a little bit excited about it. But nevertheless, confused as to why I was in a cinema. 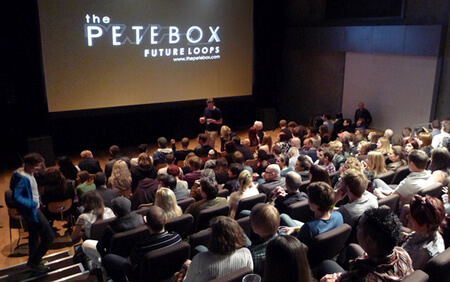 PeteBox, who’s real name is Peter Sampson, stood in the aisle, greeting people as they walked in, clearly glad to see some familiar faces at the sell-out event. And as the lights dimmed, he stepped into a spotlight, dressed in a turquoise silk jacket, and explained he had prepared an audio visual show for us that night because that is, after all, what he is all about.
He moved to the side and the screen came to life – kicking off with his excellent rendition of Kids by MGMT. His face filled the screen as he threw the baseline into the microphone, followed by another couple of levels and a melody that sounded more like a trumpet than something a voice box could produce. Already sounding more like a four-piece band than a one man act, he started to sing. And this is where the PeteBox offers something really quite special, on top of all of this raw and unique talent he also has a wonderful voice that would hold you captive even without the beats. Oh, and did I mention he also plays the guitar?
He then proceeded to take us through the journey of his first album; each artfully shot, highlighting his talent, creativity and passion. From the garden setting for a take of Nirvana’s Lithium to the home-studio-style setting he chose for Crimewave, an original track.
The audience broke into applause at the end of each shot, with Pete in the sidelines it was almost felt like a live performance. As impressive as it was I was desperate to see him live and had everything crossed that he would perform. PeteBox did not disappoint. As the last film drew to an end, the screen disappeared and he was back in the spotlight, this time with a microphone and his loop recording kit. Huge black curtains were tied back on each side, with the large theatre-style drapes both framing and dwarfing his body.
It was the moment we had waited for, and I almost felt nervous. Having seen such an impressive collection on screen, I just hoped he’d be able to pull it off live. And he did. He performed Wave and Where is my Mind with breathtaking perfection that rivalled the pre-recorded collection. We watched in fascination as each sound and beat was looped, once again transforming him into that fictitious band.

As the evening drew to a close I felt privileged to have been part of such a momentous event. I might not have done my research, leaving me unaware that it was more of a screening than a gig, but on reflection I wouldn’t have changed a thing.

Instead I walked out in awe of both his live lyrical and digital visual talents. And this is just the beginning.